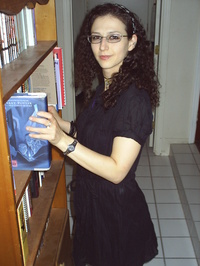 “Sleep my little baby-oh
Sleep until you waken
When you wake you'll see the world
If I'm not mistaken...

Kiss a lover
Dance a measure,
Find your name
And buried treasure...

Face your life
Its pain,
Its pleasure,
Leave no path untaken.”
― Neil Gaiman, The Graveyard Book

“Just living is not enough," said the butterfly, "one must have sunshine, freedom, and a little flower.”
― Hans Christian Anderson, The Complete Fairy Tales
tags: life
1039 likes

I’ve got two daughters who will have to make their way in this skinny-obsessed world, and it worries me, because I don’t want them to be empty-headed, self-obsessed, emaciated clones; I’d rather they were independent, interesting, idealistic, kind, opinionated, original, funny – a thousand things, before ‘thin’. And frankly, I’d rather they didn’t give a gust of stinking chihuahua flatulence whether the woman standing next to them has fleshier knees than they do. Let my girls be Hermiones, rather than Pansy Parkinsons.”
― J.K. Rowling
tags: character, fat, girls, j-k-rowling
1977 likes

“Until a man is twenty-five, he still thinks, every so often, that under the right circumstances he could be the baddest motherfucker in the world.”
― Neal Stephenson, Snow Crash
16 likes

“Cakes have gotten a bad rap. People equate virtue with turning down dessert. There is always one person at the table who holds up her hand when I serve the cake. No, really, I couldn’t she says, and then gives her flat stomach a conspiratorial little pat. Everyone who is pressing a fork into that first tender layer looks at the person who declined the plate, and they all think, That person is better than I am. That person has discipline. But that isn’t a person with discipline; that is a person who has completely lost touch with joy. A slice of cake never made anybody fat. You don’t eat the whole cake. You don’t eat a cake every day of your life. You take the cake when it is offered because the cake is delicious. You have a slice of cake and what it reminds you of is someplace that’s safe, uncomplicated, without stress. A cake is a party, a birthday, a wedding. A cake is what’s served on the happiest days of your life. This is a story of how my life was saved by cake, so, of course, if sides are to be taken, I will always take the side of cake.”
― Jeanne Ray
75 likes

Brom
author of
The Child...

I'm glad you found me. Surprisingly, there are a lot of Miras.

I love your photo!