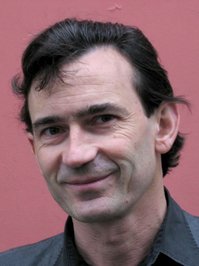 3.75 avg rating — 4 ratings
More series by Benoît Peeters…
Quotes by Benoît Peeters  (?)
Quotes are added by the Goodreads community and are not verified by Goodreads. (Learn more)
“The plane that had taken off from Baltimore was caught in bad weather, which meant the Derridas missed their connection at Boston. Derrida found this delay and the whole chaotic journey a real trial. On the flight the following day, he spent the whole time tense and hunched up, clenching his fists tightly. And when Marguerite coaxed him to relax, he replied, furiously: ‘Don’t you realize that I’m keeping the plane in the air by the sole force of my will?’ He was traumatized for a long time, and for several years he refused to get back into a plane.”
― Benoît Peeters, Derrida: A Biography
1 likes
Like

“Avital Ronell – a committed vegetarian – relates that one day, at a dinner with Chantal and René Major, she let one dish go by without taking a helping, which caused a certain embarrassment. When she said she had perfectly decent philosophical reasons for not eating meat, Derrida turned to ask her what they were. So Avital told him what it meant to her to incorporate the body of the other. Shortly afterwards, Derrida, who was extraordinarily receptive to this kind of thing, started to speak of carnophallogocentrism rather than phallogocentrism. Later on, with me and in front of me, he said he was a vegetarian. But one day, someone told me he had eaten a steak tartare, as carnivorous a kind of food as you can get. For me, it was as if he had betrayed me. When I spoke to him about it, he initially said I was behaving like a cop. Then he said, neatly: ‘I’m a vegetarian who sometimes eats meat.”
― Benoît Peeters, Derrida: A Biography
1 likes
Like

“After dinners in Ris-Orangis, Derrida would gladly offer to drive home any guests without transport. He enjoyed driving, and always went into Paris by car. He’d learned when still very young, on the job, with his father’s car. But since he had never studied the highway code, he had his own ideas about it, which could sometimes lead to spectacular results. He considered, for example, that most ‘no entry’ signs did not actually apply to him, and that big roads should automatically have priority over smaller ones. At the wheel, he rapidly lost his cool. In traffic jams, he could almost get hysterical. And, to crown it all, whenever he stopped for even a short time he would start taking notes. In a letter to Éric Clémens, he indicated in a PS: ‘Excuse the handwriting, I’m writing in the car (what a life!), but I’ve stopped, not even at a red light. I’ve just thought of the title for a book: Written at a Red Light . . .’33 But while he was not a reassuring figure at the wheel, he never had an accident.”
― Benoît Peeters, Derrida: A Biography
1 likes
Like

Is this you? Let us know. If not, help out and invite Benoît to Goodreads.