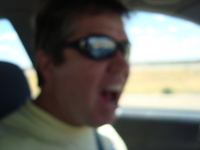 The Method and The Muse

Tune in Monday July 19, for a dialogue about dialogue and other writing topics. I'll be the featured author with host Sherry Wilds.
http://www.blogtalkradio.com/writerso...
Like  •  0 comments  •  flag

Ricko Donovan is currently reading
The Power and the Glory
by Graham Greene
bookshelves: currently-reading

“I don’t ask writers about their work habits. I really don’t care. Joyce Carol Oates says somewhere that when writers ask each other what time they start working and when they finish and how much time they take for lunch, they’re actually trying to find out, "Is he as crazy as I am?" I don’t need that question answered.”
― Philip Roth
tags: humor, writing
105 likes

“You fight your superficiality, your shallowness, so as to try to come at people without unreal expectations, without an overload of bias or hope or arrogance, as untanklike as you can be, sans cannon and machine guns and steel plating half a foot thick; you come at them unmenacingly on your own ten toes instead of tearing up the turf with your caterpillar treads, take them on with an open mind, as equals, man to man, as we used to say, and yet you never fail to get them wrong. You might as well have the brain of a tank. You get them wrong before you meet them, while you're anticipating meeting them; you get them wrong while you're with them; and then you go home to tell somebody else about the meeting and you get them all wrong again. Since the same generally goes for them with you, the whole thing is really a dazzling illusion. ... The fact remains that getting people right is not what living is all about anyway. It's getting them wrong that is living, getting them wrong and wrong and wrong and then, on careful reconsideration, getting them wrong again. That's how we know we're alive: we're wrong. Maybe the best thing would be to forget being right or wrong about people and just go along for the ride. But if you can do that -- well, lucky you.”
― Philip Roth, American Pastoral
tags: significant, truth
449 likes

“If God was going to do what He thought was best anyway, why bother to ask for anything one wanted? If you prayed, and God thought that what you asked should be granted, He would grant it. If you did not pray, and it was true that God always acted in one's best interest, you would receive whatever He wanted you to receive anyway.Prayer, thought Allison, was a dreadfully unfair, rather unsportsmanlike affair, with all the advantages on one side.”
― Grace Metalious, Peyton Place
tags: god, prayer
2 likes

“The public loves to create a hero....Sometimes I think they do it for the sheer joy of knocking him down from the highest peak. Like a child who builds a house of blocks and then destroys it with one vicious kick.”
― Grace Metalious, Peyton Place
tags: fame, hero, life
16 likes

“There can be neither beauty, nor trust, nor security between a man and a woman if there is not truth.”
― Grace Metalious, Peyton Place
23 likes

Susannah Felts
author of
This Will...