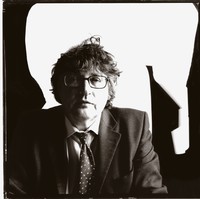 Born
in Portadown, County Armagh
June 20, 1951
Website
https://www.paulmuldoonpoetry.com/
Genre
Poetry, Literature & Fiction
edit data
Born in Northern Ireland, Muldoon currently resides in the US and teaches at Princeton University. He held the chair of Professor of Poetry at Oxford University from 1999 through 2004. In September 2007, Muldoon became the poetry editor of The New Yorker.

· 6,920 ratings · 830 reviews · 110 distinct works • Similar authors
More books by Paul Muldoon…
Quotes by Paul Muldoon  (?)
Quotes are added by the Goodreads community and are not verified by Goodreads. (Learn more)
“Why Brownlee left, and where he went,
Is a mystery even now.
For if a man should have been content
It was him; two acres of barley,
One of potatoes, four bullocks,
A milker, a slated farmhouse.
He was last seen going out to plough
On a March morning, bright and early.

By noon Brownlee was famous;
They had found all abandoned, with
The last rig unbroken, his pair of black
Horses, like man and wife,
Shifting their weight from foot to
Foot, and gazing into the future.”
― Paul Muldoon
tags: abandonment, farming
4 likes
Like

Hovercraft, held up by a

Rubber cushion of itself,

Shares its secret with no one.

We say, Hedgehog, come out

Of yourself and we will love you.


We mean no harm. We want

Only to listen to what

You have to say. We want

Your answers to our questions.


The hedgehog gives nothing

Away, keeping itself to itself.

We wonder what a hedgehog

Has to hide, why it so distrusts.


We forget the god

under this crown of thorns.

We forget that never again

will a god trust in the world.”
― Paul Muldoon
2 likes
Like

“It's Never Too Late for Rock'N'Roll