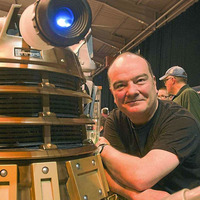 Website
https://www.facebook.com/pages/Mike-Tucker/2395...
edit data
Mike Tucker is a special effects expert who worked for many years at the BBC Television Visual Effects Department, and now works as an Effects Supervisor for his own company, The Model Unit. He is also the author of a number of original tv tie-in Doctor Who novels (some co-written with Robert Perry), and three books based on episodes of the television series Merlin. He co-wrote the factual books Ace! The Inside Story of the End of an Era with Sophie Aldred in 1996, and BBC VFX - The Story of the BBC Visual Effects Department with Mat Irvine in 2010.

“Doctor …’ Jo’s voice dropped to a conspiratorial whisper. ‘My sister, my older sister, did her medical training at the Bi-Al Foundation, a Centre for Alien Biomorphology in the asteroid belt. She was seconded to a Professor Marius. She told me loads of really crazy stories over the years, but one of those stories concerned a man called the Doctor, a space traveller who helped bring a virulent viral infection under control.”
― Mike Tucker, Doctor Who: Diamond Dogs
0 likes
Like

“It surprises me that the planet has survived so long. Do you know that they actively encourage their young to make war a game? Their culture is riddled with it. Toy pistols, toy rifles, toy grenades, war comics, action figures that hold knives and swords. Even when they avoid war, the young of this planet are exposed to horror comics, monsters under the bed, bogeymen, vampires and werewolves. Their nursery stories are full of demons and goblins and witches and kidnapped children.”
― Mike Tucker, Doctor Who: The Nightmare Of Black Island
0 likes
Like

Is this you? Let us know. If not, help out and invite Mike to Goodreads.