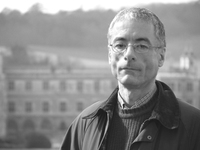 Website
http://www.paul-waters.com/
Genre
Historical Fiction
edit data
Paul Waters was born and schooled in England, but says his real education did not begin until he was seventeen, when he ran away to sea.

He spent the next two years travelling the world on a tramp steamer. It was during this time, somewhere in the Indian Ocean, that he picked up a copy of Herodotus, and began a love affair with the classical world of Greece and Rome.

Later he returned to England and studied Classics at University College London. Since then he has lived and worked in France, Greece, America and southern Africa. He now lives in Cambridge, England.

“You see, Marcus, some things have value yet have no price, and a wise man learns them and their worth. So do not let the standard of the marketplace be your guide. A man goes there for flour and greens, but not for virtue.”
― Paul Waters, Of Merchants & Heroes
tags: character
3 likes
Like

“I remember Cannae," she said, raising her head, "when we thought all was lost. Carthage had defeated us, and there were those who gave up hope. Yet we survived, by our fortitude, and by believing that we should endure. There are times, Marcus, when courage is all you have."
I looked down at the stone floor, chastened into silence by her cold, stern words. This was her way, as it had always been. It was the Roman way. Grief was an indulgence; and though she surely suffered, her suffering was for her alone. It seemed hard, but she had come from a hard family, brave men and brave women who through the generations had survived by facing down hardship and loss. Of all her long line of ancestors, she was not going to be the one to break.
And nor, I decided, was I.”
― Paul Waters, Of Merchants & Heroes
tags: ancient-rome, bravery, family
1 likes
Like

“Know yourself, said the god. Yet this I did not know. Or, perhaps, I had known it for ever. I thought of my ugly scarred leg, and all my imperfection.
What he was telling me seemed hardly possible. I shook my head.
‘But surely Menexenos has— Is there no one in Athens, then?’
‘That is what everyone thinks – that there must be someone somewhere. But there is not.’
He shrugged.
‘It is not that he does not wish it otherwise. I think he believes that what he seeks is not to be found. He is in love with honour, Marcus; and a thing beyond honour, which he sees, but I cannot explain. When I ask him, he tells me it is the light behind the sun, whatever that is. But whatever it is, I know he had rather have no one than choose a base lover.”
― Paul Waters, Of Merchants & Heroes
tags: love
0 likes
Like