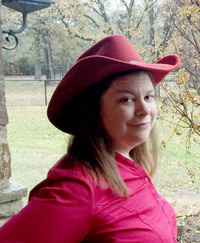 Now a professional speaker and creative writing instructor at Southern Methodist University in Dallas, Tex is blazing a trail through writers conferences, workshops, and fan conventions around the country – as an endlessly energetic, relentlessly enthusiastic one-woman stampede. Find her online at www.TheTexFiles.com! Arianne "Tex" Thompson is home-grown Texas success story. After earning a bachelor’s degree in history and a master’s in literature, she channeled her passion for exciting, innovative, and inclusive fiction into the Children of the Drought – an internationally-published epic fantasy Western series from Solaris.

Now a professional speaker and creative writing instructor at Southern Methodist University in Dallas, Tex is blazing a trail through writers conferences, workshops, and fan conventions around the country – as an endlessly energetic, relentlessly enthusiastic one-woman stampede. Find her online at www.TheTexFiles.com! ...more

Regardless: I appreciate you thinking of me, and wish you luck in your quest!(less)
flag
See 1 answer from Arianne "Tex" Thompson…

Litopians, This One's For You!

Litopia fans! If you're seeing this because of the Pop-Up Submissions video/podcast we just recorded - welcome, welcome, welcome! I hope you enjoyed it as much as I did - and if you need manuscript development help, I am HERE FOR YOU.

If you would like a whole-manuscript review of your work in progress, please let me know! I regularly offer this service for Writing Workshops Dallas and on LitReacto Read more of this blog post »
View more on Arianne "Tex" Thompson's website »
Like  •  0 comments  •  flag

“All invitations must proceed from heaven perhaps; perhaps it is futile for men to initiate their own unity, they do but widen the gulfs between them by the attempt.

So at all events thought old Mr. Graysford and young Mr. Sorley, the devoted missionaries who lived out beyond the slaughterhouses, always travelled third on the railways, and never came to the club. In our Father's house are many mansions, they taught, and there alone will the incompatible multitudes of mankind be welcomed and soothed. Not one shall be turned away by the servants on that verandah, be he black or white, not one shall be kept standing who approaches with a loving heart.

And why should the divine hospitality cease here? Consider, with all reverence, the monkeys. May there not be a mansion for the monkeys also? Old Mr. Graysford said No, but young Mr. Sorley, who was advanced, said Yes; he saw no reason why monkeys should not have their collateral share of bliss, and he had sympathetic discussions about them with his Hindu friends. And the jackals? Jackals were indeed less to Mr. Sorley's mind but he admitted that the mercy of God, being infinite, may well embrace all mammals. And the wasps? He became uneasy during the descent to wasps, and was apt to change the conversation. And oranges, cactuses, crystals and mud? and the bacteria inside Mr. Sorley? No, no, this is going too far. We must exclude someone from our gathering, or we shall be left with nothing.”
― E.M. Forster, A Passage to India

“The Humbug whistled gaily at his work, for he was never as happy as when he had a job which required no thinking at all. After what seemed like days, he had dug a hole scarcely large enough for his thumb. Tock shuffled steadily back and forth with the dropper in his teeth, but the full well was still almost as full as when he began, and Milo's new pile of sand was hardly a pile at all.

"How very strange," said Milo, without stopping for a moment. "I've been working steadily all this time, and I don't feel the slightest bit tired or hungry. I could go right on the same way forever."

"Perhaps you will," the man agreed with a yawn (at least it sounded like a yawn).

"Well, I wish I knew how long it was going to take," Milo whispered as the dog went by again.

"Why not use your magic staff and find out?" replied Tock as clearly as anyone could with an eye dropper in his mouth. Milo took the shiny pencil from his pocket and quickly calculated that, at the rate they were working, it would take each of them eight hundred and thirty-seven years to finish.

"Pardon me," he said, tugging at the man's sleeve and holding the sheet of figures up for him to see, "but it's going to take eight hundred and thirty-seven years to do these jobs."

"Is that so?" replied the man, without even turning around. "Well, you'd better get on with it then."

"But it hardly seems worth while," said Milo softly.

"WORTH WHILE!" the man roared indignantly.

"All I meant was that perhaps it isn't too important," Milo repeated, trying not to be impolite.

"Of course it's not important," he snarled angrily. "I wouldn't have asked you to do it if I thought it was important." And now, as he turned to face them, he didn't seem quite so pleasant.

"Then why bother?" asked Tock, whose alarm suddenly began to ring.

"Because, my young friends," he muttered sourly, "what could be more important than doing unimportant things? If you stop to do enough of them, you'll never get to where you're going." He punctuated his last remark with a villainous laugh.

"Quite correct!" he shrieked triumphantly. "I am the Terrible Trivium, demon of petty tasks and worthless jobs, ogre of wasted effort, and monster of habit.”
― Norton Juster, The Phantom Tollbooth
11 likes

“The parental eye shed no tears when the time for leave-taking came; a half-rouble in copper coins was given to the boy by way of pocket-money and for sweets, and what is more important, the following admonition:

"Mind now, Pavlusha, be diligent, don't fool or gad about, and above all please your teachers and superiors. If you please your superiors, then you will be popular and get ahead of everyone even if you lag behind in knowledge and talent. Don't be too friendly with the other boys, they will teach you no good; but if you do make friends, cultivate those who are better off and might be useful. Don't invite or treat anyone, but conduct yourself in such a way as to be treated yourself, and above all, take care of and save your pennies, that is the most reliable of all things. A comrade or friend will cheat you and be the first to put all the blame on you when in a fix, but the pennies won't betray you in any difficulty. With money you can do anything in the world."

Having admonished his son thus, the father took leave of him and trundled off home on his 'magpie'. Though from that day the son never set eyes on him more, his words and admonitions had sunk deep into his soul.”
― Nikolai Gogol, Dead Souls
12 likes

“Well, so that's the prosecutor! He lived and lived, and then died! And they will say in the papers that he died to the regret of his staff and all mankind, a respected citizen, a rare father, a model husband, and they will write a lot more stuff and nonsense about him; they will add, maybe, that he was mourned by widows and orphans; but if one were to investigate the matter thoroughly, it will emerge that he had nothing to him except his bushy eyebrows.”
― Nikolai Gogol, Dead Souls
9 likes

“There was once, in the country of Alifbay, a sad city, the saddest of cities, a city so ruinously sad that it had forgotten its name. It stood by a mournful sea full of glumfish, which were so miserable to eat that they made people belch with melancholy even though the skies were blue...

And in the depths of the city, beyond an old zone of ruined buildings that look like broken hearts, there lived a happy young fellow by name of Haroun, the only child of the storyteller Rashid Khalifa, whose cheerfulness was famous throughout that unhappy metropolis, and whose never-ending stream of tall, and winding tales had earned him not one but two nicknames. To his admirers he was Rashid the Ocean of Notions, as stuffed with cheery stories as the sea was full of glumfish; but to his jealous rivals he was the Shah of Blah.”
― Salman Rushdie, Haroun and the Sea of Stories
25 likes