Discover new books on Goodreads
See if your friends have read any of Blake J. Harris's books 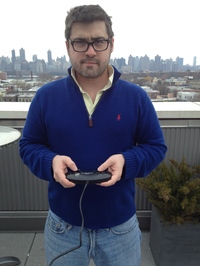 What do you like to do with your free time? Currently reading Console Wars and enjoying it. Thanks for sharing the Sega/Nintendo Saga :D
Blake J. Harris Hey Nikiverse!

Sorry for the delayed response. Luckily, though, what held me up was the answer to your question: In my free time, unsurprisingly, I lik…moreHey Nikiverse!

Sorry for the delayed response. Luckily, though, what held me up was the answer to your question: In my free time, unsurprisingly, I like to write other things. Most recently I've been writing behind-the-scenes oral histories for the movies featured on Paul Scheer's HOW DID THIS GET MADE:
blakejharris.com/hdtgm/

Outside of writing, I love spending time with my fiance (to whom CONSOLE WARS is dedicate) and hanging out with our little family of teddy bears...(less)
flag
Hey Blake, are you being tapped to help with this doc on MK? http://chicagoist.com/2015/07/29/documentary_about_midway_games_seek.php
Blake J. Harris Hey Matt, sorry it took me so long to see this. No, I haven't been contacted about that...but it sounds really good and I'm excited to see it.
flag
See all 10 answers from Blake J. Harris…

Blake Harris is currently reading
Straight Flush: The True Story of Six College Friends Who Dealt Their Way to a Billion-Dollar Online Poker Empire--and How It All Came Crashing Down . . .
by Ben Mezrich (Goodreads Author)
bookshelves: currently-reading

Blake Harris is currently reading
A Storm of Swords (A Song of Ice and Fire, #3)
by George R.R. Martin
bookshelves: currently-reading

“There was no such thing as a magic touch, and it wouldn’t have mattered if there were, because the only thing it takes to sell toys, vitamins, or magazines is the power of story. That was the secret. That was the whole trick: to recognize that the world is nothing but chaos, and the only thing holding it (and us) together are stories. And Kalinske realized this in a way that only people who have been there and done that possibly can: that when you tell memorable, universal, intricate, and heartbreaking stories, anything is possible.”
― Blake J. Harris, Console Wars: Sega, Nintendo, and the Battle that Defined a Generation
4 likes
Like

“the Super NES, which would hit stores on August 23, 1991. All systems would come with the groundbreaking new Super Mario World game, while four others would immediately be available for purchase: F-Zero, Pilotwings, Gradius III, and SimCity.”
― Blake J. Harris, Console Wars: Sega, Nintendo, and the Battle that Defined a Generation
4 likes
Like

“So after the family moved to New Jersey, she formally became NOA’s first employee and helped select a location for the new company’s office. Arakawa and his wife settled on a small space on the seventeenth floor of a Manhattan high-rise located in the center of the toy district at 25th Street and Broadway.”
― Blake J. Harris, Console Wars: Sega, Nintendo, and the Battle that Defined a Generation
2 likes
Like