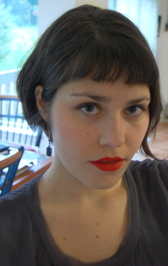 Folks! This is a novel that I really loved and blurbed. And here's a chance to win it through the Goodreads giveaway.

Ella Leya is an Azerbaijani-American composer, singer and writer. The Orphan Sky is her first novel.
https://www.goodreads.com/giveaway/sh...

Kseniya Melnik is currently reading
Symphony for the City of the Dead: Dmitri Shostakovich and the Siege of Leningrad
by M.T. Anderson
bookshelves: currently-reading

More of Kseniya's books…
Quotes by Kseniya Melnik  (?)
Quotes are added by the Goodreads community and are not verified by Goodreads. (Learn more)
“Kruchina was an archaic word for grief, found mostly in the old folk songs and poems. Kruchina grief was not regular sadness or disappointment with everyday troubles, but rather the existential sorrow about a woman’s lot that never goes away, not even at the happiest of moments.
Masha remembered this song from one of the movies of her youth, when all the movies and books were about the war and patriotism, about the great sacrifice for the future. German soldiers were burning a Russian village. The children screamed, the helpless grandmas and grandpas shrieked, the animals and fowl scattered for their lives. A young German soldier broke into the last izba standing and found two women huddled on a bench. Except for a single candle, the house was dark and it was hard to see what was in the shadowy corner: a trunk or a cradle.
Before the soldiers could reload their guns, the women began to sing “Kruchina.” In the middle of this chaos, time stopped. The soldiers listened as the voices washed over their round helmets and tense shoulders, crept into their machine guns, and spread through their stiffened veins and cold stomachs, like mother’s milk.
Sveta might not have even seen the movie, but she and Masha always sang “Kruchina” when their hearts, one or both, were in the wrong place.”
― Kseniya Melnik, Snow in May: Stories

“She wasn’t lucky—she was brave. Courage was needed if you wanted to live your life and not just hold forth about it at meetings and demonstrations.”
― Kseniya Melnik, Snow in May: Stories
1 likes
Like

“Everything felt wrong, like she was living in a parallel universe, separated by one crucial degree from the one containing the life she was meant to have. This other, true life was visible to her, even palpable at certain instances—like during the births of her sons—but impossible to occupy. She cried from pity for herself, and because of the stupidity of such pity. She cried for Luciano and for Anton. She cried because she’d only loved one boy with the follow-you-over-the-edge-of-the-earth kind of love—at fifteen. She cried for her mother, who had died two years ago, and whom she still missed every day.”
― Kseniya Melnik, Snow in May: Stories
0 likes
Like

“I can shake off everything as I write; my sorrows disappear, my courage is reborn.”
― Anne Frank
tags: writing
3892 likes
Like

“The good we secure for ourselves is precarious and uncertain until it is secured for all of us and incorporated into our common life.”
― Jane Addams
tags: humanity, inequality, rights, security, society
1115 likes
Like

“Many people, myself among them, feel better at the mere sight of a book.”
― Jane Smiley, Thirteen Ways of Looking at the Novel
tags: books, reading
6574 likes
Like

“It's actually very difficult to make something both simple and good.”
― Paul Simon
1501 likes
Like

Literary Prizes — 265 members — last activity Jul 08, 2012 07:00AM
A place to discuss the Booker, the Pulitzer, the Nobel Prize for Literature, the Newbery, and/or any other literary awards.

Cool! It should be waiting for you.

I spotted your book on NetGalley :) I'm looking forward to picking up my copy next month.