,
Discover new books on Goodreads
See if your friends have read any of Rian van der Merwe's books 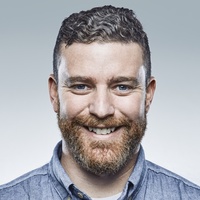 Rian Merwe rated a book it was amazing
The Lord of the Rings
by J.R.R. Tolkien
bookshelves: fantasy, currently-reading

More of Rian's books…
Quotes by Rian van der Merwe  (?)
Quotes are added by the Goodreads community and are not verified by Goodreads. (Learn more)
“What’s the use of fast iteration if all it does is get us to a suboptimal solution more quickly,”
― Rian Van Der Merwe, Making It Right: Product Management For A Startup World
2 likes
Like

“Mike Monteiro takes on this issue by attacking the humble calendar in “The Chokehold of Calendars2”: Meetings may be toxic, but calendars are the superfund sites that allow that toxicity to thrive. All calendars suck. And they all suck in the same way. Calendars are a record of interruptions. And quite often they’re a battlefield over who owns whose time.”
― Rian van der Merwe, Making It Right: Product Management For A Startup World
0 likes
Like

“Arriving at a company as a new (or sometimes, the first) product manager can be daunting. Product management is usually introduced in an organization once there is such a high level of internal enthusiasm and chaos that the leaders aren’t sure how to handle it any more. And then everyone looks to the product manager to “manage stuff.”
― Rian van der Merwe, Making It Right: Product Management For A Startup World
0 likes
Like

“Killing a man should be harder than waving a length of pipe in their direction. It should take long enough for one's conscience to get in the way.”
― Hugh Howey, The Unraveling
104 likes
Like

“Introverts are drawn to the inner world of thought and feeling, said Jung, extroverts to the external life of people and activities. Introverts focus on the meaning they make of the events swirling around them; extroverts plunge into the events themselves. Introverts recharge their batteries by being alone; extroverts need to recharge when they don’t socialize enough.”
― Susan Cain, Quiet: The Power of Introverts in a World That Can't Stop Talking
48 likes
Like

“Instead of talking about whether it’s easier to lower a price than raise it, we should have been addressing more substantive issues such as how to meet the expectations of customers and how to keep investing in software development so that the customers who did buy our product could put it to better use.”
― Ed Catmull, Creativity, Inc.: Overcoming the Unseen Forces That Stand in the Way of True Inspiration
0 likes
Like

“Truth be told, the inward gaze is something she’s not too fond of. But there are secrets that lurk in the mind, and she doesn’t want any of them sneaking up on her. Sometimes it pays to take a deep look inside even if you get queasy gazing into those dark corners.”
― Alden Bell, The Reapers Are the Angels
2 likes
Like

“Niagara. Used to be a place honeymooners would go. Maybe you seen some movies. All this water, pouring over the cliffs, a thousand rivers falling down all at once, like somehow there was a mistake in the crust of the earth and someone had taken away half of a lakebed. And the force of it, water against water, so strong you can feel the spray on your cheeks a half a mile distant. I never seen anything like it. See, that’s the kind of thing that just keeps on going, century after century, no matter what us puny humans are doin all a-scurry over the surface of the earth.”
― Alden Bell, The Reapers Are the Angels
0 likes
Like