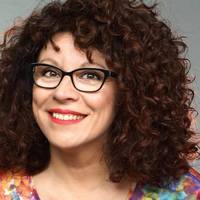 Lucy hasn't connected with their friends on Goodreads, yet.

“wants to be a zombie, but finds that she can’t get bit to save her life.” Madison thought about that for a minute. “You are a strange man. But I mean that in a good way.” She looked up, seeing the surprise that she had arranged for him walking down the aisle toward his booth. With a little prodding, Spenser and Target had agreed to be zombies hanging around ExBoy’s booth. Target in particular was quite eager. But best of all, Crystal had agreed to try to get Toonie out of the house by bringing her to the convention, and Madison could see now that they were doing more than just attending. They, too, were walking toward them, made up as zombies. Crystal, her beautiful complexion drained to a deathly pallor, was dressed like a cheerleader with her little pleated skirt and sleeveless shell top in bloody tatters, carrying what Madison had thought was a dirtied pom-pom but now realized was a head with long bloody hair. Spenser wore a nurse’s old fashioned white uniform, with a little white hat attached to her blonde hair pinned up like Tippy Hedren’s in an Alfred Hitchcock movie. Choosing to keep her face its prettiest, she sported a bloody gouge on her left forearm. Instead of sensible nurse’s shoes, she wore high heels. The blood on her uniform”
― Lucy Carol, Hot Scheming Mess
0 likes
Like