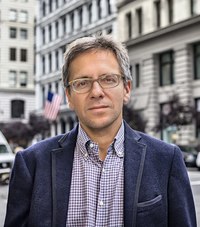 Born
in Baltimore, Maryland, The United States
November 12, 1969
Twitter
ianbremmer
Genre
Politics
edit data
Ian Bremmer (born November 12, 1969) is an American political scientist specializing in US foreign policy, states in transition, and global political risk. He is the president and founder of Eurasia Group, a leading global political risk research and consulting firm, and a professor at Columbia University. Eurasia Group provides financial, corporate, and government clients with information and insight on how political developments move markets. Bremmer is of Armenian and German descent.

“In American and European politics, “them” is often an immigrant hoping to come inside—the Mexican or Central American migrant hoping to enter the United States or the Middle Eastern/North African Muslim refugee hoping to live in Germany, France, Britain, or Sweden. In poorer countries, especially those with borders drawn by colonizers, “them” is often the ethnic, religious, or sectarian minorities with roots that are older than the borders themselves. Think of Muslims in India, in western China, or in the Caucasus region of Russia. Sunni Muslims in Iraq or Shia Muslims in Saudi Arabia. Think of Christians in Egypt or Kurds in Turkey. Think of Chinese and other ethnic minorities in Indonesia and Malaysia. There are many more examples. These groups become easy targets when times are hard and a politician looks to make a name for himself at their expense.”
― Ian Bremmer, Us vs. Them: The Failure of Globalism
2 likes
Like

“There are many reasons why the tech revolution will hit the emerging world much harder than it will hit Europe and the United States. In developed countries, children are more likely to grow up with digital technologies as toys and then to encounter them in school. Governments in these countries have money to invest in educational systems that prepare workers, both blue and white collar, for change. Their universities have much greater access to state-of-the-art technologies. Their companies produce the innovations that drive tech change in the first place. This creates a dynamic in which high-wage countries are more likely than low-wage ones to dominate the skill-intensive industries that will generate twenty-first-century growth, leaving behind large numbers of those billion-plus people who only recently emerged from age-old deprivation. The wealth in developed countries helps them maintain much stronger social safety nets than in poorer countries to help citizens who lose their jobs, fall ill, or need to care for sick children or aging parents. In short, wealthier countries are both more adaptable and more resilient than developing ones.”
― Ian Bremmer, Us vs. Them: The Failure of Globalism
1 likes
Like

“Our superhero foreign policy draws rivers of taxpayer dollars toward the center, empowering Washington at the expense of local governments. It also empowers the president at the expense of Congress in ways that upset the balance that the authors of the Constitution took great pains to design.”
― Ian Bremmer, Superpower: Three Choices for America's Role in the World
1 likes
Like

Is this you? Let us know. If not, help out and invite Ian to Goodreads.