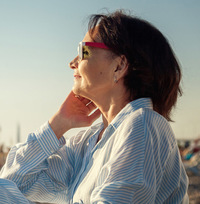 
[image error] A friend posted this to her Facebook page and says she doesn’t know where it originated.

“After a torrent of rapid knocking, Lucy swept past her in the hallway, threw her purse on the table, and landed her ass on the couch before turning expectantly toward Riley and patting the couch next to her. Her dark eyes examined every nuance of Riley’s appearance.
“Okay, dish,” she demanded. “Every last detail.”
Riley rolled her eyes and shook her head as she scooted across the floor in her sock feet. She didn’t feel great, but at least she wasn’t in full torture mode. She thought Lucy might have waited until afternoon instead of showing up at ten-thirty a.m. but what the hell. Her old sweatshirt hugged against her stomach as she pulled her arms together.
“Well,” she feigned ignorance, “what do you want to talk about?”
Lucy slammed her hand on the couch. “Oh, don’t you even. Right now.” She threw herself back against the couch, her face fixed in a not-to-be-toyed-with expression. Riley noted with mild interest how her breasts jiggled inside her white t-shirt. Maybe she was turning into some kind of sex fiend.
“Okay, yes, he sets me on fire. I can’t help it. Blame my gender lineage.”
“I could see he set you fire. Your eyes could hardly look at anything else.” She picked at a tear in her faded jeans then flared back at Riley with an expression of awe. “Of course, my eyes had a few spasms of their own in his direction. Shit, the man is a god. I can’t remember seeing a body that well put together. At least,” she arched her back, “not a male body.”
Riley threw back her head and laughed. Lucy was good tonic, at the very least. “Oh my god, can you stand it?!”
“No—but tell me you didn’t give in, before I pass out.”
“No, we didn’t have sex. But he did kiss me and my panties nearly fell straight to my ankles,” she chuckled. “He stopped himself, thank god, or I would have had him right there on the floor.”
“You were drunk.”
“Oh, yeah, ridiculous drunk. He ordered steaks delivered while he drove me home, and then sliced the steak for me and practically put it in my mouth.” She couldn’t sit still, the memory forcing her up from the couch to pace. She’d spent the entire morning and half the night trying to forget everything about him, and of course the other half had been consumed with remembering everything about him.
“Shit. Fire.” Lucy’s glance followed her. “I want some. Can we have him?”
― Lizzie Ashworth, His to Lose

“Miss McClure...” he had been talking while her mind drifted off.
She brought her gaze back to his face, trying to focus on the flinty stare and thin line of his lips. “Sorry, I was distracted. And can’t you call me Bryn?”
“I’ll try, but generally I prefer a more formal approach in business dealings. It keeps the relationship clear.”
“Like, you in charge, the other person in submission?” The words popped out before she edited herself. Her eyes grew large as she watched his face go through a change of expression. A slight smile hovered at the corner of his mouth.
“Yes, something like that. Might I get a refill?” He held up his empty glass.”
― Lizzie Ashworth, Hers to Choose
tags: desire, sex, submission
1 likes
Like

“No use kidding herself. This situation with Jarrod was a slippery slope. She’d had plenty of men since Sam, attractive, well endowed, charming in many ways. Jarrod was different, and she needed to figure out why before she found herself in the middle of stupid. She had a business to think of, people who depended on her for their livelihood, even more people present and future who needed the services she offered. It wasn’t just a job, damn it, it was a mission. No one should be as out of touch with themselves as thoroughly as she had been. For as long.”
― Lizzie Ashworth, A Gift for Jarrod
tags: bdsm, erotica, sex
0 likes
Like

“I don't know the question, but sex is definitely the answer.”
― Woody Allen
tags: humor, life, sex
6539 likes
Like

“Man may have discovered fire, but women discovered how to play with it.”
― Candace Bushnell, Sex and the City
tags: love, relationships
6186 likes
Like

“The difference between sex and love is that sex relieves tension and love causes it.”
― Woody Allen
tags: sex
2337 likes
Like

Barbara Ehrenreich
author of
Nickel an...

Tiffany Reisz
author of
The Siren