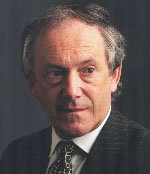 Born
The United Kingdom
edit data
Peter Atkins is a fellow of Lincoln College, University of Oxford and the author of about 70 books for students and a general audience. His texts are market leaders around the globe. A frequent lecturer in the United States and throughout the world, he has held visiting professor­ships in France, Israel, Japan, China, and New Zealand. He was the founding chairman of the Committee on Chemistry Education of the International Union of Pure and Applied Chemistry and was a member of IUPAC’s Physical and Biophysical Chemistry Division.

Librarian Note: There is more than one author in the Goodreads database with this name.

“Someone with a fresh mind, one not conditioned by upbringing and environment, would doubtless look at science and the powerful reductionism that it inspires as overwhelmingly the better mode of understanding the world, and would doubtless scorn religion as sentimental wishful thinking. Would not that same uncluttered mind also see the attempts to reconcile science and religion by disparaging the reduction of the complex to the simple as attempts guided by muddle-headed sentiment and intellectually dishonest emotion?

...Religion closes off the central questions of existence by attempting to dissuade us from further enquiry by asserting that we cannot ever hope to comprehend. We are, religion asserts, simply too puny. Through fear of being shown to be vacuous, religion denies the awesome power of human comprehension. It seeks to thwart, by encouraging awe in things unseen, the disclosure of the emptiness of faith. Religion, in contrast to science, deploys the repugnant view that the world is too big for our understanding. Science, in contrast to religion, opens up the great questions of being to rational discussion, to discussion with the prospect of resolution and elucidation. Science, above all, respects the power of the human intellect. Science is the apotheosis of the intellect and the consummation of the Renaissance. Science respects more deeply the potential of humanity than religion ever can.”
― P.W. Atkins
tags: atheism, atheist, brainwashing, doubt, existence, indoctrination, reductionism, respect, science, truth, understanding
9 likes
Like

“Taking care of yourself means finding a balance that works for you, then having the discipline to maintain that balance.”
― Peter Atkins, Life Is Short And So Is This Book
6 likes
Like