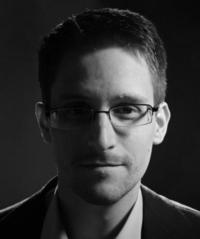 Born
in Elizabeth City, The United States
June 21, 1983
Twitter
snowden
Genre
Nonfiction
edit data
Edward Joseph Snowden is an American whistleblower who copied and leaked highly classified information from the National Security Agency (NSA) in 2013 when he was a Central Intelligence Agency (CIA) employee and subcontractor. His disclosures revealed numerous global surveillance programs, many run by the NSA and the Five Eyes Intelligence Alliance with the cooperation of telecommunication companies and European governments, and prompted a cultural discussion about national security and individual privacy.

“There is, simply, no way, to ignore privacy. Because a citizenry’s freedoms are interdependent, to surrender your own privacy is really to surrender everyone’s. You might choose to give it up out of convenience, or under the popular pretext that privacy is only required by those who have something to hide. But saying that you don’t need or want privacy because you have nothing to hide is to assume that no one should have, or could have to hide anything – including their immigration status, unemployment history, financial history, and health records. You’re assuming that no one, including yourself, might object to revealing to anyone information about their religious beliefs, political affiliations and sexual activities, as casually as some choose to reveal their movie and music tastes and reading preferences. Ultimately, saying that you don’t care about privacy because you have nothing to hide is no different from saying you don’t care about freedom of speech because you have nothing to say. Or that you don’t care about freedom of the press because you don’t like to read. Or that you don’t care about freedom of religion because you don’t believe in God. Or that you don’t care about the freedom to peaceably assemble because you’re a lazy, antisocial agoraphobe. Just because this or that freedom might not have meaning to you today doesn’t mean that that it doesn’t or won’t have meaning tomorrow, to you, or to your neighbor – or to the crowds of principled dissidents I was following on my phone who were protesting halfway across the planet, hoping to gain just a fraction of the freedom that my country was busily dismantling.”
― Edward Snowden, Permanent Record
57 likes
Like

Is this you? Let us know. If not, help out and invite Edward to Goodreads.