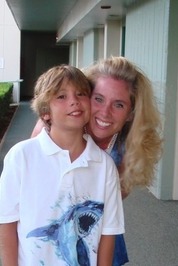 Hi All! I released my latest book this past week. It's called Violet. It centers around a mass shooting at a concert. A few people have asked me about the title, why Violet? The answer is that Violet comes into play in the story when Anna admits to CJ that she has never liked her name because it's generic and she feels invisible. He asks her what she would have chosen and Violet is her first answe Read more of this blog post »
Like  •  0 comments  •  flag

“The problem with being nuts, she thought, is that you don't always feel as if you're nuts. Sometimes, in fact, you feel perfectly sane, and there just happens to be a trailer-shaped dragon crouching in the lot next door.”
― Christopher Moore
159 likes

And I also got very grumpy because I felt like they were pirating my stuff, that it was bad. And then I started to notice that two things seemed much more significant. One of which was… places where I was being pirated, particularly Russia where people were translating my stuff into Russian and spreading around into the world, I was selling more and more books. People were discovering me through being pirated. Then they were going out and buying the real books, and when a new book would come out in Russia, it would sell more and more copies. I thought this was fascinating, and I tried a few experiments. Some of them are quite hard, you know, persuading my publisher for example to take one of my books and put it out for free. We took “American Gods,” a book that was still selling and selling very well, and for a month they put it up completely free on their website. You could read it and you could download it. What happened was sales of my books, through independent bookstores, because that’s all we were measuring it through, went up the following month three hundred percent.

I started to realize that actually, you’re not losing books. You’re not losing sales by having stuff out there. When I give a big talk now on these kinds of subjects and people say, “Well, what about the sales that I’m losing through having stuff copied, through having stuff floating out there?” I started asking audiences to just raise their hands for one question. Which is, I’d say, “Okay, do you have a favorite author?” They’d say, “Yes.” and I’d say, “Good. What I want is for everybody who discovered their favorite author by being lent a book, put up your hands.” And then, “Anybody who discovered your favorite author by walking into a bookstore and buying a book raise your hands.” And it’s probably about five, ten percent of the people who actually discovered an author who’s their favorite author, who is the person who they buy everything of. They buy the hardbacks and they treasure the fact that they got this author. Very few of them bought the book. They were lent it. They were given it. They did not pay for it, and that’s how they found their favorite author. And I thought, “You know, that’s really all this is. It’s people lending books. And you can’t look on that as a loss of sale. It’s not a lost sale, nobody who would have bought your book is not buying it because they can find it for free.”

“Here's to the crazy ones. The misfits. The rebels. The troublemakers. The round pegs in the square holes. The ones who see things differently. They're not fond of rules. And they have no respect for the status quo. You can quote them, disagree with them, glorify or vilify them. About the only thing you can't do is ignore them. Because they change things. They push the human race forward. And while some may see them as the crazy ones, we see genius. Because the people who are crazy enough to think they can change the world, are the ones who do.”
― Rob Siltanen
tags: advertising, apple, change, commercial, computers, different, madness, misattributed-apple, misattributed-steve-jobs, misfits, nonconformity, progressive, rebels, status-quo, think-different, troublemakers
65325 likes

“Have you ever given someone a book you enjoyed enormously, with a feeling of envy because they were about to read it for the first time, an experience you could never have again?”
― Jack Finney, Time and Again
54 likes

The Paranormal Bookshelf — 41 members — last activity Mar 02, 2019 07:02PM
This is the Goodreads part of our group. We review, we read, we talk, we promote new authors and books. Anything and everything books & authors.

Adam Oster
author of
The Legen...

SittieCates
author of
Are You T...

I've started with the messenger as it comes first in the timeline.I love Carlo with his mood changing eyes:)

I really loved Hidden in the Pages, and I loved the way it ended, I'll look forward to reading more of your work:)