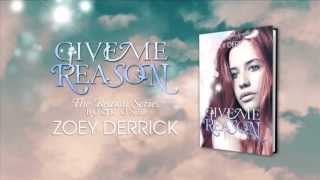 XX
Zoey(less)
flag
Hi Zoey Firstly I would like to congratulate you on writting such a great book (Wicked Revenge). Please tell me you have a second Wicked Angels MC book on the way? Hopeful that it is Tryke and Emily's story. Look forward to hear from you. Rosa
Zoey Derrick Hi Rosa,
Yes, I haven't hung up the Wicked Angels books just yet. I just need there to be more hours in the day and faster fingers.

XX
Zoey…moreHi Rosa,
Yes, I haven't hung up the Wicked Angels books just yet. I just need there to be more hours in the day and faster fingers.

Title: Fractured Breaths Author: Zoey Derrick Genre: Contemporary Romance Release Date: January 10 I breathe in. I breathe out. I eat, sleep and breathe. I’m surviving. I’m a survivor. I’ll do whatever it takes to keep my life moving forward. I shouldn’t want to. I should want to be buried in the ground somewhere. I’m […]

“backward. It roars across his skin in response. He turns around, takes a step away from the diner, and there’s a stab of pain between his shoulder”
― Zoey Derrick, Give Me Reason
3 likes
Like

“Let us do this. Let us take care of you,” Talon whispers in my ear and my head falls back to his shoulder as the pleasure rocks through me. “This is not about us. This is about us taking care of our girl.”
― Zoey Derrick, Claiming Addison
3 likes
Like

“There's only one thing I need." I placed my hand on his heart. "The rest is just details.”
― Tina Reber, Love Unscripted
131 likes
Like

“Do I have to make a poster and scream Ryan, Ryan?" I kidded.
"The only time I want to hear you scream my name is when I'm making love to you. Although you did call me God the other night. That's acceptable, too.”
― Tina Reber, Love Unscripted
121 likes
Like

Jennifer Probst
author of
The Marri...

Andrea Heltsley
author of
The Luna'...

Kate Dawes
author of
Fade into...

“Now? The shows gonna start.”
“Oh my god are you actually whining.” I cross my arms over my chest.
He pouts. “Maybe a little. You cock blocked me.”
“She probably has rabies. You’ll get over it.”

For Addison Beltrand, PR rep for Bold International, Inc. climbing the corporate ladder is all that matters in life. Her hard work is finally rewarded with the promotion she’s worked her ass off to earn—but the gig comes at a price. She leaves in two days for a twelve-week tour with America’s hottest alternative rock band, 69 Bottles.

Talon Carver, lead singer of 69 Bottles, has no problem with women--as long as they’re gone by morning. When Addison shakes up his world, it’s a huge problem—compounded by the fact that Addison’s not the only one he wants.

Kyle Black, manager of 69 Bottles, has a secret. He and Addison are closer than she thinks, but telling her could keep her away. When Talon sets his sights on Addison, Kyle uses his secret to push her into Talon’s arms, only to discover she isn’t the only one he needs.

Talon and Kyle push their boundaries and Addison’s, but can they throw their reservations to the wind and claim her together?

Two men. One woman. A rock band. A tour bus. One Wild Ride…

****Content Warning****
Sexy, naked, bisexual rock stars…and a lot more…
This book contains, but is not limited to the following sexual content – reader discretion is advised - hot sex between two men and one woman. M/M/F, M/F/M, M/F, F/M and M/M sexual content. There are no boundaries when these three crash together, as long as you’re over 18 years of age.

Pre-Order now for an Exclusive Swag Pack and a chance at a $50.00 Amazon Gift Card. You can find those details here: http://goo.gl/WiueHr

Fred wrote: "Hi Zoey! Thanks for including me among your Goodreads friends!"
Absolutely Fred! It was great meeting you at RT back in May! :-) Thanks for accepting! <3

Hi Zoey! Thanks for including me among your Goodreads friends!

Gemstones are a girls' best friend!! Bad boys, alpha males, wild weekends and strong leading ladies - this collection has it all!

Get it now before it's gone!

What to Read After Fifty Shades of Grey (#WTRAFSOG) began as a Facebook page created by Summer Daniels dedicated to helping book lovers discover great reads after FSoG. Over time, the page has grown in popularity and now has over 88,000 followers!

Make sure to check out our previous WTRAFSOG Box Sets here!

Dear Zoey,
Thanks so much for acepting my friendship request! I am looking forward to future book discussions with you and reading your published novels!
Kind Regards
Lucinda X ♥

:D xo Congratulations on the release of Finding Love's Wings!!!

Hi Everyone!
I hope this little message finds you all well.
I have been super busy, but I wanted to let you know that one of the things I have been working on (besides the big book) was published today.
Stop by www.deadlyeverafter.com for a Zoey Exclusive.
Thank you to the Undead Duo for having me on their blog. Much love to you two! It was a lot of fun and I thank you all for your never ending words of encouragement.
*HugS*
Until we meet again,
Zoey

The list is growing and growing with the wonderful books I have read. I have even added many of those that I have read throughout my lifetime. Though trust me, there are way to many to name at this point.
I hope that my reviews and book lists are helping you to find new reads. If so, leave me a comment, I love to know when someone takes my suggestions.
*HugS*
Zoey

Sorry I have not been around on GR. I am on Twitter and usually hop on there on and off throughout the day.
I have been really busy in my own writing bubble of late and in desperate desire to finish up this monster I am calling a book. Find me on twitter @zoeyderrick and also on the blog. www.zoeyderrick1.blogspot.com

I fully intend to write longer reviews on all of my favorite books, for now they are starred.
There are many books that I have read in my lifetime and my kindle is full of well over 300 books, shorts, novellas and serials that I have read in less than a year and most of which I have not and do not care for. So truly the books that you see marked with 3, 4 and 5 stars are books that have completely captivated, motivated and inspired me.
Being that I am a writer, a full time mom, a full time employee and a down right busy person, my reviews will take time so if you are an Author on my friends list and I have not yet rated your book or wrote my review, bare with me just a bit longer.

Zoey wrote: "Thank you Marata! I have added a GFC to my page. It is still very much a work in progress and thank you so much for the words of encouragement.

Thank you Marata! I have added a GFC to my page. It is still very much a work in progress and thank you so much for the words of encouragement.


Marata wrote: "Hi Zoey! Thanks for your friendship:D

Can you add a GFC follower thingie on your blog so I can join? Keep writing! Never give up....

Hi Zoey! Thanks for your friendship:D

Can you add a GFC follower thingie on your blog so I can join? Keep writing! Never give up....