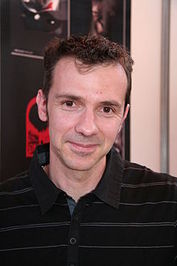 Born
in Annecy, France
October 15, 1973
Website
http://www.franckthilliez.com
Twitter
fthilliez
Genre
Mystery & Thrillers, Horror
edit data
Franck Thilliez is the author of several bestselling novels in his native France, where he lives. Thilliez was a computer engineer for a decade before he began writing.
Syndrome E, is his first novel to be published in the United States. Several of his books were made into films : La chambre des morts (2007), Ligne de mire (2014) and Obsession(s) (2009)

Franck Thilliez isn't a Goodreads Author (yet), but they do have a blog, so here are some recent posts imported from their feed.

3.97 avg rating — 905 ratings
Quotes by Franck Thilliez  (?)
Quotes are added by the Goodreads community and are not verified by Goodreads. (Learn more)
“In 1973, the CIA, informed that reporters were sniffing around their affairs, had destroyed all the files concerning Project MK-Ultra. But the CIA is, above all, an enormous bureaucracy. Joseph Rauth was convinced that some traces had to remain of such an important project, which had extended over twenty-five years and involved dozens of directors and a staff of thousands. Under the auspices of the Rockefeller Commission, we were authorized access to documents or other materials relating to research into mind control. We hired an ex-CIA operative named Frank Macley to look into it. After several weeks of investigation, he confirmed that most of the files had been destroyed by two high-ranking officials: CIA Director Samuel Neels and one of his close associates, Michael Brown. But through his persistence, Macley unearthed seven huge crates of documents relating to MK-Ultra at the Agency’s records storage facility. Crates that had gotten lost in the administrative labyrinth.”
― Franck Thilliez, Syndrome E
2 likes
Like

“So you’ve probably already shown them Bernard and Bianca—The Rescuers.” “Like every other mom.” “That cartoon contains a subliminal image of a naked woman hiding in a window, at one point. A small personal quirk of the animator’s, no doubt. Don’t worry, it won’t have any effect on your children’s minds—the image is too tiny! The fact remains that no one ever saw it, in all the years that cartoon was being shown.”
― Franck Thilliez, Syndrome E
1 likes
Like

“In 1977, I was barely twenty-five. The law office of Joseph Rauth, Washington, D.C. Two men, a father and son, arrived in Joseph’s office. The son, David Lavoix, was holding an article from the New York Times, and the father seemed…troubled, absent. David Lavoix held out the clipping, which talked about Project MK-Ultra. Just so you know, the Times had sent the first shot across the bow two years earlier, in 1975, by revealing that in the fifties and sixties the CIA had conducted mind-control experiments on American citizens, mostly without their knowledge or consent. Investigative hearings were held and the American people were officially informed about the existence of this top secret project.”
― Franck Thilliez, Syndrome E
1 likes
Like

Is this you? Let us know. If not, help out and invite Franck to Goodreads.