Puddin’ eats some weird stuff, but even he don’t eat Tide Pods! 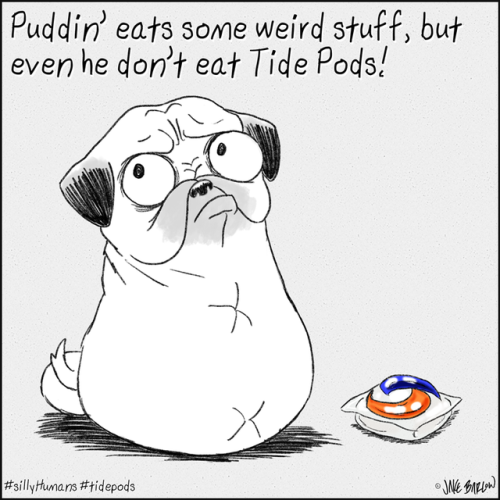 Puddin’ eats some weird stuff, but even he don’t eat Tide Pods!

“Pushing too hard will only make things freeze up. How many great problems have gone unsolved because men didn’t know enough, or have enough faith in the creative process and in themselves, to let go for the whole mind to work at it?”
― Daniel Keyes, Flowers for Algernon
7 likes

“When you’re twenty-two and you pass out at a friend’s house, it’s totally normal. When you do it at forty-two, you’re never invited back.”
― Bucky Sinister, Black Hole
0 likes

“The fastest drop in babies per woman in world history went completely unreported in the free Western media. Iran—home in the 1990s to the biggest condom factory in the world, and boasting a compulsory pre-marriage sex education course for both brides and grooms—has a highly educated population with excellent access to an advanced public health-care system.”
― Hans Rosling, Factfulness: Ten Reasons We're Wrong About the World—and Why Things Are Better Than You Think
0 likes

Sebastian Junger
author of
The Perfe...

Paolo Bacigalupi
author of
The Windu...

I'm making the switch away from Shelfari and to Good Reads, after Shelfari decided to ban some members from my "Atheists on Shelfari" group because some Mormon members who had asserted themselves into a discussion between group members apparently had their feelings hurt and complained to Shelfari, resulting in the banning of two of my group members.

If a person of religious faith enters into a discussion between non-believers, then obviously that religious person is looking for a fight. But to then go whine and complain to the host that someone from that group hurt your feelings, is absolutely pathetic.

Shelfari has completely overreacted, especially in choosing sides in this dispute. Fairness would dictate that if any member was to be banned, it would be all of the members in the discussion. But banning only certain members from exercising their rights to free speech because the feelings of another group were hurt is morally shameful. Indeed, that a site based on the open exchange of ideas and readers' opinions about the books they read, and the subject matter contained within these books would suppress the free speech of its members is astonishing. The irony is breathtaking.

I want nothing to do with any service or organization that engages in censorship.