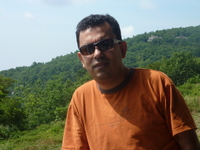 The Virus of Faith

“Religion, a medieval form of unreason, when combined with modern weaponry becomes a real threat to our freedoms”

On December 16th, 2014, nine gunmen affiliated with the Pakistani Taliban conducted a terrorist attack in Peshawar, Pakistan. They entered a school, opened fire, and killed 145 people, 132 of whom were schoolchildren[1].

A mere three weeks later, the world witnessed an Read more of this blog post »
6 likes · Like  •  9 comments  •  flag

Michael Shermer
author of
Why Peopl...