She writes stories about love and life, but one thing is consistent across all her books--her girls never need a guy to save the day... but sometimes the nights.

She writes stories about love and life, but one thing is consistent across all her books--her girls never need a guy to save the day... but sometimes the nights.

Ready for Book 2? Constantine is. 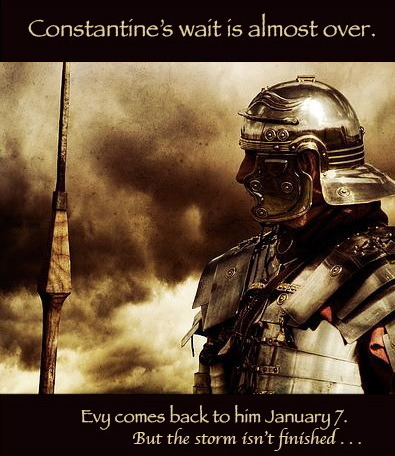 Jen Greyson is currently reading
The Book of Love: Poems of Ecstasy and Longing
by Rumi
bookshelves: currently-reading

1. The right to not read

2. The right to skip pages

3. The right to not finish

4. The right to reread

5. The right to read anything

6. The right to escapism

7. The right to read anywhere

8. The right to browse

9. The right to read out loud

“The only thing that I see that is distinctly different about me is I'm not afraid to die on a treadmill. I will not be out-worked, period. You might have more talent than me, you might be smarter than me, you might be sexier than me, you might be all of those things you got it on me in nine categories. But if we get on the treadmill together, there's two things: You're getting off first, or I'm going to die. It's really that simple, right?
You're not going to out-work me. It's such a simple, basic concept. The guy who is willing to hustle the most is going to be the guy that just gets that loose ball. The majority of people who aren't getting the places they want or aren't achieving the things that they want in this business is strictly based on hustle. It's strictly based on being out-worked; it's strictly based on missing crucial opportunities. I say all the time if you stay ready, you ain't gotta get ready.”
― Will Smith
208 likes

“He kissed me like I was the empire he was sworn to protect and would die a thousand deaths to keep secure. He kissed me like I was a woman with a deep dark wildness that needed to be fed and he knew just how to do it. He kissed me like he was dying and this was the last kiss he would ever taste. Then his kiss changed and his tongue was velvet and silk as he kissed me like I was fine bone china that needed exacting care and gentleness. Then the storm built in both of us and I ground myself against him, and he was searching with his kiss and his hands sliding down to my ass for the part of me that was a savage animal and so was he and we were going to forget the world and “become two primal, uncomplicated beasts fucking as if the universe depended on our passion to fuel it. And I was pretty sure we could. I felt something building in me, a hunger that was exhilarated to be alive and knew it could come out and play as hard as it wanted, because I could never break this man. Not even with all my superpowers. I could dump every bit of myself on him and never have to worry about giving him a heart attack or breaking a bone or giving him a black eye by accident. He could handle anything. My high temper, my need for adventure and stimulation, my intellect, rages, and rants, my sheer physical strength, even the darkness of my shadow-self. He was a broad-shouldered beast. He was hard and capable and permanent and had an immortal heart. A frenzy of lust exploded inside me and I met the savagery of his kiss with all the savagery in my soul, and there is one fuck of a lot of it.”
― Karen Marie Moning, Feversong
tags: dani-ryodan, feversong
22 likes

New Writers Support — 64 members — last activity May 02, 2014 09:09AM
A place for writers to support each other as they dip their toes (or dive head-first) into the publishing world.

Make a book a bestseller — 960 members — last activity Dec 24, 2020 05:16AM
If a bunch of people can get Betty White to host Saturday Night Live seems like we can make a great book(s) a bestseller.

I am still waiting for my copy signed from the amazing Jen.

Aw, see...we both love us some Dean Koontz!

Hi Jen,
Thanks for sending a friend request to this fellow Goodreads author!

Jen, thank you for the friendship.
Stay naughty,
Savannah