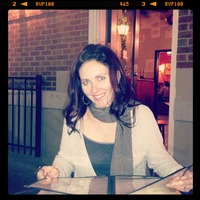 Website
http://www.morganwylie.net
Twitter
MWylieBooks
Genre
Young Adult, Fantasy, Paranormal
Member Since
January 2010
URL
https://www.goodreads.com/morganwylie
edit data
Morgan Wylie published her first novel, Silent Orchids, one year after moving across the country with her family on a journey of new discovery. After an amazing three years in Nashville, TN and the release of two more books, Morgan and her family found their way back to the Northwest where they now reside. Still working everyday with great optimism, Morgan continues to embrace all things: "Mama", wife, teacher, and mediator to the many voices and muses constantly chattering in her head... where it gets pretty loud!

You can find her and news on her books at the following:

MorganWylie.net
MorganWylieBooks on Facebook
@MWylieBooks on Twitter/Instagram
Info@MorganWylie.net Email Morgan Wylie published her first novel, Silent Orchids, one year after moving across the country with her family on a journey of new discovery. After an amazing three years in Nashville, TN and the release of two more books, Morgan and her family found their way back to the Northwest where they now reside. Still working everyday with great optimism, Morgan continues to embrace all things: "Mama", wife, teacher, and mediator to the many voices and muses constantly chattering in her head... where it gets pretty loud!

You can find her and news on her books at the following:

Surprise! I'm excited to announce I will be releasing another story within the world of Havenwood Falls, but this one goes back in time to the 1800's to when the Blackstones first discovered they were witch hunters and their journey to find Havenwood Falls. Check it out!

The Age of Alandria (4 books)
by
Morgan Wylie (Goodreads Author)

Morgan Wylie is currently reading
Believe It: How to Go from Underestimated to Unstoppable
by Jamie Kern Lima
bookshelves: currently-reading

“smiled a real smile, then looked from Daegan back to him and nodded. Not sure why she wanted Daegan to explain—or how he even knew all the information that suddenly flashed in his mind—he nevertheless answered for her. “She is from a lost race that is from deep within the mountains. There are not many left of her kind... the Ehsmia. They have gifts beyond those of other Faeries, but I’m not sure all of what they can do. They keep to themselves, but she knew we were coming so she came out to meet us.” He frowned. Turning to Ella, he asked, “Why us? I do not understand how you know what we are looking for, let alone that we are looking at all.” “In due time, all will be revealed to you,” she said, looking deeply into his eyes, boring into his soul. It was personal and invasive, but before he could look away, she released him, leaving him with a sensation of warmth spreading throughout his body. “You are ready, Daegan of the Ferrishyn. Do not fear your destiny.” She inclined her head slightly, but Daegan could only frown, feeling a sense of foreboding, as though everything was about to change. What is she talking about? “The Ehsmia? I have heard stories... legends of your people. You are also called the Hidden People, are you not?” Hal asked in awe. When Ella only nodded, he continued. “I thought your people were no more, if they even had existed at all.” He did not mean to be rude. “That is how we prefer to be known... or not known at all. Otherwise, what purpose would our hiding be if we were known?” she said with a smirk on her face but said no more. Ella turned to face the rock wall, which looked like a crumbling ruin of what was at one time a part of a great wall. It was built into the side of the Kandrian Mountains. Hal’s look of confusion mirrored Daegan’s own. Hal finally shrugged his shoulders, figuring they would understand “in due time.” Oddly, his typical nonchalant response gave Daegan a sense of calm. Staring at the rocks that made up the wall for what seemed several minutes but in reality was probably much shorter, Ella laid her hand flat onto a rock that suddenly appeared smoother and duller than all the other old, jagged stones. There was a rumbling of the ground that stopped as suddenly as it started. She gave them a sneaky smile. Daegan still wasn’t sure he trusted her, but at this point it seemed she might be the only one with answers of any kind. “Are you ready to follow where not many have been before, a land within a land?” she asked. Without waiting for their answer, she turned around and walked straight into the rock wall, which had magically become an illusion. Daegan and Hal both knew there was magic in Alandria and that every species had their own type of magic. They had their own magic as well, but they had only heard of this kind of magic in their own legends. Halister and Daegan quickly followed Ella, not wanting to get shut out of what could be their only opportunity to see where the Hidden People were, well, hidden. CHAPTER FIVE It was dark, yet they had no trouble following Ella through the murky tunnel of rock and stone that looked worn from centuries of use and natural erosion. Other than the thin layer of water trickling over some of the stones, it was silent and peaceful. They had been following a star, literally, for the past several minutes, but it wasn’t above them. Ella’s short, jagged snow-white hair allowed them to see the back of her neck, upon which was a horizontally stretched eight-point star from which a soft blue light emanated, marking her as other. Assuming she could see in the dark, they kept following and soon the tunnel began to lighten. Green leafy vines began crawling up the sides of the”
― Morgan Wylie, Silent Orchids
0 likes
Like

“you need to understand the past in order to be a part of the future”
― Morgan Wylie, Silent Orchids
0 likes
Like

“Others see their possibility in the reality of you. Your message is your life lived.”
― Neale Donald Walsch
61 likes
Like

“If you want the best the world has to offer, offer the world your best.”
― Neale Donald Walsch
tags: inspirational, new-age, quote, spiritual
260 likes
Like

“The deepest secret is that life is not a process of discovery, but a process of creation. You are not discovering yourself, but creating yourself anew. Seek therefore, not to find out Who You Are, but seek to determine Who You Want to Be.”
― Neale Donald Walsch
tags: inspirational, spiritual
382 likes
Like

Nikolas & Co Club — 42 members — last activity May 16, 2011 03:25PM
Keeping friends posted on the progress of the book, and all things related. http://www.nicholauslyons.com

Indie Book Collective — 2973 members — last activity May 04, 2021 04:10AM
A group of indie authors, helping each other out and bringing new books to the world

Hello Morgan
Thanks for being my friend here :)
Birdy