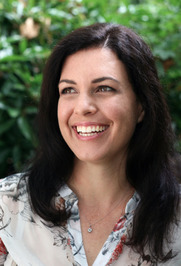 Kendra has MAs in Film Studies and Museum Studies. Her writing on Vivien Leigh and cinema has been published by Manchester University Press, the BFI, i-5, Bright Lights Film Journal, the National Portrait Gallery, Cohen Films and others. She has participated in the production of numerous festivals, exhibits, and documentaries relating to classic film. She is also the owner and editor of vivandlarry , an online historical archive and blog dedicated to Vivien Leigh, Laurence Olivier, and classic cinema.

Kendra is represented by the Laura Morris Literary Agency and resides in London with her husband and cat.

Kendra has MAs in Film Studies and Museum Studies. Her writing on Vivien Leigh and cinema has been published by Manchester University Press, the BFI, i-5, Bright Lights Film Journal, the National Portrait Gallery, Cohen Films and others. She has participated in the production of numerous festivals, exhibits, and documentaries relating to classic film. She is also the owner and editor of vivandlarry , an online historical archive and blog dedicated to Vivien Leigh, Laurence Olivier, and classic cinema.

Kendra is represented by the Laura Morris Literary Agency and resides in London with her husband and cat.

Hi Kendra :) do you have any advice on getting in contact with people that worked with or personally knew a celebrity for interviews etc.? As a young classic film fan without substantial experience hoping to eventually publish a book, I feel like a lot of important people won't take me seriously. Thanks so much!
Kendra Bean Hi Jennifer,

Boy, can I relate to where you're coming from! I know this can be nerve-wracking, but we all have to start somewhere, and I've learned by …moreHi Jennifer,

Boy, can I relate to where you're coming from! I know this can be nerve-wracking, but we all have to start somewhere, and I've learned by doing. With celebrities and authors, it's probably best to send a letter to them via their agent, unless you can find personal email address. When you write or phone people, even if you don't have much experience, you have to make yourself sound like you do. Play up your strengths. Do you have a blog about classic film? Mention it! Had you been doing research about your subject prior to interviewing people? Mention it!

Another good thing to do is reiterate how serious you are about your subject and what sort of narrative you're looking to present. For example, I told people I was working on a photography book about Vivien, however, there would also be text and I wanted to be fair and truthful in my writing. I've found that people really like talking about themselves and sharing stories, and many are happy to have other people (especially younger people) express an interest in their work and their memories. So make sure you do some research about the person you're interviewing. Have they written a book about your subject? Read it. Have they appeared in documentaries before? Watch them. Let them know you're at least somewhat familiar with who they are.

Once you get your first interview under your belt (and interviews are tricky - I'm still learning how to ask the best questions in order to get the best answers), more doors will open for you. Don't forget to ask if they know anyone you may be able to contact! As long as you present yourself as professional and knowledgeable and enthusiastic, people will take you seriously.

Good luck! :)(less)
flag
What is the single biggest challenge you had to overcome while writing "Vivien Leigh: An Intimate Portrait"?
Kendra Bean Hi Andy,

I started out with an idea and no knowledge of how to make that idea into a tangible reality, so everything was challenging on some level. But…moreHi Andy,

I started out with an idea and no knowledge of how to make that idea into a tangible reality, so everything was challenging on some level. But I think in particular, there were two big mountains to climb. The first was actually getting a publisher. In my mind Vivien Leigh is still totally famous (hello, everyone knows Gone With the Wind). But publishers didn't see it that way. She wasn't considered a "safe subject" like Marilyn Monroe or Audrey Hepburn, so I had to really sell the idea that Vivien deserved a new book and that she was still relevant and had a fan base.

The second major hurdle was getting everything turned in on a tight deadline. I've never been someone who can just sit down at the computer and have the words flow out of my fingertips onto the keyboard. I scrutinize and rewrite until it sounds the way I want it to. So it was tough, and there was a lot of anxiety that went with it. But it was very rewarding in the end to know that I could do it.

It's been a HUGE learning experience for me, and I wouldn't trade it for anything.
(less)
flag
See all 3 answers from Kendra Bean…

What Success has Taught Me

Vivien Leigh shares with readers of "Everywoman" magazine the secrets of her success, and discusses the things she values most in life.

Kendra Bean is currently reading
The Great Mortality: An Intimate History of the Black Death, the Most Devastating Plague of All Time
by John Kelly (Goodreads Author)
bookshelves: currently-reading

“I hope my life will prove a useful & good one, to many people." - Vivien Leigh”
― Kendra Bean, Vivien Leigh: An Intimate Portrait
7 likes
Like

“I know everyone has to face periods of despondency and that one must not always trust everyone, or else one can be very hurt. At the same time, I have learned who really are my friends, and that can be very comforting, and gives one confidence for whatever lies ahead." - Vivien Leigh to Godfrey Winn, 1964.”
― Kendra Bean, Vivien Leigh: An Intimate Portrait
4 likes
Like

“As she chattered and laughed and cast quick glances into the house and the yard, her eyes fell on a stranger, standing alone in the hall, staring at her in a cool impertinent way that brought her up sharply with a mingled feeling of feminine pleasure that she had attracted a man and an embarrassed sensation that her dress was too low in the bosom. He looked quite old, at least thirty-five. He was a tall man and powerfully built. Scarlett thought she had never seen such a man with such wide shoulders, so heavy with muscles, almost too heavy for gentility. When her eye caught his, he smiled, showing animal-white teeth below a close-clipped black mustache. He was dark of face, swarthy as a pirate, and his eyes were as bold and black as any pirate's appraising a galleon to be scuttled or a maiden to be ravished. There was a cool recklessness in his face and a cynical humor in his mouth as he smiled at her, and Scarlett caught her breath. She felt that she should be insulted by such a look as was annoyed with herself because she did not feel insulted. She did not know who he could be, but there was undeniably a look of good blood in his dark face. It showed in the thin hawk nose over the full red lips, and high forehead and the wide-set eyes.”
― Margaret Mitchell, Gone with the Wind
tags: chapter-vi
128 likes
Like

“America is supposed to be a place where you can better yourself, your family, and your community. But this is only possible if you have a stable home.”
― Matthew Desmond, Evicted: Poverty and Profit in the American City
1 likes
Like

“It’s easy to convince yourself that the past has no bearing on how we live today. But the Abolition of Slavery Act was introduced in the British Empire in 1833, less than two hundred years ago. Given that the British began trading in African slaves in 1562, slavery as a British institution existed for much longer than it has currently been abolished – over 270 years. Generation after generation of black lives stolen, families torn apart, communities split. Thousands of people being born into slavery and dying enslaved, never knowing what it might mean to be free. Entire lives sustaining constant brutality and violence, living in never-ending fear. Generation after generation of white wealth amassed from the profits of slavery, compounded, seeping into the fabric of British society.”
― Reni Eddo-Lodge, Why I’m No Longer Talking to White People About Race
0 likes
Like

Margaret Mitchell
author of
Gone with...

Tana French
author of
In the Woods

Terence Pepper
author of
Audrey He...