Discover new books on Goodreads
See if your friends have read any of Sieni A.M.'s books 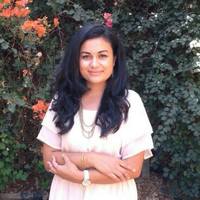 Born
Samoa
Website
http://sieniam.blogspot.co.il/
Genre
Romance, Young Adult
Member Since
October 2011
URL
https://www.goodreads.com/sienimo
edit data
Sieni A.M. is a world traveler, avid reader, and aspiring writer. She was born and raised in the South Pacific, graduated from the University of Canterbury, and is currently living in Australia with her husband and two daughters.

Facebook: https://www.facebook.com/illumineher
Pinterest: http://pinterest.com/illumineher/ Sieni A.M. is a world traveler, avid reader, and aspiring writer. She was born and raised in the South Pacific, graduated from the University of Canterbury, and is currently living in Australia with her husband and two daughters.

“Don’t ever settle for something short of amazing in whatever you do in your life—there are a myriad of paths and choices to be made. Seek out the signs that speak to your heart and follow them. Then rely on God to protect you the rest of the journey.”
― Sieni A.M., Illumine Her
9 likes
Like

“When you love someone, that person holds the most incredible power over you because they have the ability to cause you the most pain.”
― Sieni A.M., Illumine Her
5 likes
Like

“It signifies joy, purity, beauty, and when given as a gift, secret love.”
― Sieni A.M., Illumine Her
3 likes
Like

“When I despair, I remember that all through history the way of truth and love have always won. There have been tyrants and murderers, and for a time, they can seem invincible, but in the end, they always fall. Think of it--always.”
― Mahatma Gandhi
tags: despair, evil, goodness, inspirational, love, sadness, truth, victory
11747 likes
Like

“If I should have a daughter…“Instead of “Mom”, she’s gonna call me “Point B.” Because that way, she knows that no matter what happens, at least she can always find her way to me. And I’m going to paint the solar system on the back of her hands so that she has to learn the entire universe before she can say “Oh, I know that like the back of my hand.”

She’s gonna learn that this life will hit you, hard, in the face, wait for you to get back up so it can kick you in the stomach. But getting the wind knocked out of you is the only way to remind your lungs how much they like the taste of air. There is hurt, here, that cannot be fixed by band-aids or poetry, so the first time she realizes that Wonder-woman isn’t coming, I’ll make sure she knows she doesn’t have to wear the cape all by herself. Because no matter how wide you stretch your fingers, your hands will always be too small to catch all the pain you want to heal. Believe me, I’ve tried.

I want her to see the world through the underside of a glass bottom boat, to look through a magnifying glass at the galaxies that exist on the pin point of a human mind. Because that’s how my mom taught me. That there’ll be days like this, “There’ll be days like this my momma said” when you open your hands to catch and wind up with only blisters and bruises. When you step out of the phone booth and try to fly and the very people you wanna save are the ones standing on your cape. When your boots will fill with rain and you’ll be up to your knees in disappointment and those are the very days you have all the more reason to say “thank you,” ‘cause there is nothing more beautiful than the way the ocean refuses to stop kissing the shoreline no matter how many times it’s sent away.

You will put the “wind” in win some lose some, you will put the “star” in starting over and over, and no matter how many land mines erupt in a minute be sure your mind lands on the beauty of this funny place called life.

And yes, on a scale from one to over-trusting I am pretty damn naive but I want her to know that this world is made out of sugar. It can crumble so easily but don’t be afraid to stick your tongue out and taste it.

“Baby,” I’ll tell her “remember your mama is a worrier but your papa is a warrior and you are the girl with small hands and big eyes who never stops asking for more.”

Remember that good things come in threes and so do bad things and always apologize when you’ve done something wrong but don’t you ever apologize for the way your eyes refuse to stop shining.

Your voice is small but don’t ever stop singing and when they finally hand you heartbreak, slip hatred and war under your doorstep and hand you hand-outs on street corners of cynicism and defeat, you tell them that they really ought to meet your mother.”
― Sarah Kay
tags: inspirational, poem
2396 likes
Like

I’ve got two daughters who will have to make their way in this skinny-obsessed world, and it worries me, because I don’t want them to be empty-headed, self-obsessed, emaciated clones; I’d rather they were independent, interesting, idealistic, kind, opinionated, original, funny – a thousand things, before ‘thin’. And frankly, I’d rather they didn’t give a gust of stinking chihuahua flatulence whether the woman standing next to them has fleshier knees than they do. Let my girls be Hermiones, rather than Pansy Parkinsons.”
― J.K. Rowling
tags: character, fat, girls, j-k-rowling
1973 likes
Like

“It isn't God who's evil-it's us.......Everyone wants to know where evil comes from and why the world is riddle with it. Why doesn't anyone ask where goodness comes from? Human beings have a tremendous capacity for cruelty. Why is there any goodness at all? Why are people like Grace and Richard so kind? Because there's a God, and he hasn't allowed the earth to be entirely corrupted. There are sticky like leaves, if you look for them. And when you recognize them, you can feel his presence.”
― Sylvain Reynard, Gabriel's Rapture
tags: gabriel, julia
59 likes
Like

Ya Lovers — 66 members — last activity Nov 17, 2015 10:14AM
This is a group to discuss the books You have read and or want to read. Questions and options on book related topics

Indie Book Collective — 2971 members — last activity May 13, 2021 02:48AM
A group of indie authors, helping each other out and bringing new books to the world

Sarah Kay
author of
No Matter...

Tarryn Fisher
author of
The Wives

how's vain going? heard many good things about it but havent got round to reading it yet. i'm up to my ears with edits for my book.

Awesome I just bought both :)

Shy Di wrote: "Hi Sieni!! OMG I'm so excited about your book, I can't wait. I've come to you for help, I LOVE your recommendations and I wanted to know if you can point me towards a good book.

hi shy di! yes, i read it. it ends the series well. i recomm "slammed" by colleen hoover or "vain" by fisher amelie. umm if i think of another one i'll message you.

Hi Sieni!! OMG I'm so excited about your book, I can't wait. I've come to you for help, I LOVE your recommendations and I wanted to know if you can point me towards a good book.

Ooh have you read The Proposal yet? I just brought it on my kindle. Hope all is well on your end :)

thanks for the friendvite, Sieni. ur favs are just my type of book!

Naima wrote: "Haha too funny cuz, I'm reading Telesa at the moment and came
Across this site hehe so random...so yes need to get
Back in my reading.....send me some of your top recommendations :-)
xx"

there are too many to name! what are you interested in? how is the fam? give my love!!

Haha too funny cuz, I'm reading Telesa at the moment and came
Across this site hehe so random...so yes need to get
Back in my reading.....send me some of your top recommendations :-)
xx