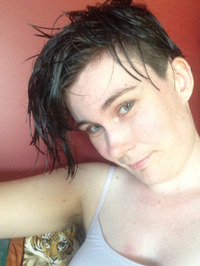 Website
https://nicolefieldwrites.wordpress.com/
Twitter
faerywhimsy
Genre
Gay and Lesbian, Contemporary, Paranormal
Member Since
December 2010
URL
https://www.goodreads.com/nicolefield
edit data
Nicole writes across the spectrum of sexuality and gender identity. She lives in Melbourne with one of her partners, two cats, a whole lot of books and a bottomless cup of tea.

She can be found on Wordpress: nicolefieldwrites.wordpress.com and Twitter: @faerywhimsy.


Her books are available on: Amazon | Publisher | B&N | Smashwords | Netgalley

“This year is yours.”

“Love is a temporary madness. It erupts like an earthquake and then subsides. And when it subsides you have to make a decision. You have to work out whether your roots have become so entwined together that it is inconceivable that you should ever part. Because this is what love is. Love is not breathlessness, it is not excitement, it is not the promulgation of promises of eternal passion. That is just being "in love" which any of us can convince ourselves we are. Love itself is what is left over when being in love has burned away, and this is both an art and a fortunate accident. Your mother and I had it, we had roots that grew towards each other underground, and when all the pretty blossom had fallen from our branches we found that we were one tree and not two.”
― Louis de Bernières, Corelli's Mandolin
633 likes

“We are going to die, and that makes us the lucky ones. Most people are never going to die because they are never going to be born. The potential people who could have been here in my place but who will in fact never see the light of day outnumber the sand grains of Arabia. Certainly those unborn ghosts include greater poets than Keats, scientists greater than Newton. We know this because the set of possible people allowed by our DNA so massively exceeds the set of actual people. In the teeth of these stupefying odds it is you and I, in our ordinariness, that are here.We privileged few, who won the lottery of birth against all odds, how dare we whine at our inevitable return to that prior state from which the vast majority have never stirred?”
― Richard Dawkins, Unweaving the Rainbow: Science, Delusion and the Appetite for Wonder
tags: death, inspirational, science, wonder
1514 likes

“Birthdays were wretched, delicious things when you lived in Beau Rivage. The clock stuck midnight, and presents gave way to magic.

Girls bit into sharp apples instead of birthday cake, chocked on the ruby-and-white slivers, and collapsed into enchanted sleep. Unconscious beneath cobweb canopies, frozen in coffins of glass, they waited for their princes to come. Or they tricked ogres, traded their voices for love, danced until their glass slippers cracked.

A prince would awaken, roused by the promise of true love, and find he had a witch to destroy. A heart to steal. To tear from the rib cage, where it was cushioned by bloody velvet, and deliver it to the queen who demanded the princess's death.

“War is not just the business of death, it is the antitheses of life.”
― joss whedon ( Fray)
tags: death, life, war
52 likes

“He was digging in his garden--digging, too, in his own mind, laboriously turning up the substance of his thought. Death--and he drove in his spade once, and again, and yet again. And all our yesterdays have lighted fools they way to dusty death. A convincing thunder rumbled through the words. He lifted another spadeful of earth. Why had Linda died? Why had she been allowed to become gradually less than human and at last... He shuddered. A good kissing carrion. He planted his foot on his spade and stamped it fiercely into the tough ground. As flies to wanton boys are we to the gods; they kills us for their sport. Thunder again; words that proclaimed themselves true--truer somehow than truth itself. And yet that same Gloucester had called them ever-gentle gods. Besides, thy best of rest is sleep, and that thou oft provok'st; yet grossly fear'st thy death which is no more. No more than sleep. Sleep. Perchance to dream. His spade struck against a stone; he stooped to pick it up. For in that sleep of death, what dreams...?”
― Aldous Huxley, Brave New World
tags: dystopia, hamlet, shakespeare
2 likes

Robin McKinley
author of
Beauty: A...

Ronyell wrote: "Hey! Thanks for the friend invite!"

Hey! Thanks for the friend invite!

Steven wrote: "I need to read those Buffy season 8 comics. I keep forgetting!!!"

I saw that! They are more amazing the further along you get. Want to buddy read when you catch up?

I need to read those Buffy season 8 comics. I keep forgetting!!!

Steven wrote: "I've emulated your status updates with quotations now. I love it, and it makes me really look for fun things to quote. :)"

I'm glad! I find it so much fun. And those quotable moments do so much more to remind me of what I read before than my reviews do ;)

I've emulated your status updates with quotations now. I love it, and it makes me really look for fun things to quote. :)

Karen wrote: "That was an obscure answer! I looked it up, but I can only read in English so I will take your answer for it ;)"

Hee! It is an English book, although the names don't sound it. English fantasy:

. Definitely worth a read!

That was an obscure answer! I looked it up, but I can only read in English so I will take your answer for it ;)