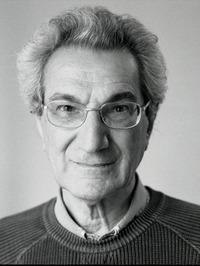 · 5,524 ratings · 379 reviews · 178 distinct works • Similar authors
More books by Antonio Negri…
Quotes by Antonio Negri  (?)
Quotes are added by the Goodreads community and are not verified by Goodreads. (Learn more)
“Throughout the world what remains of the vast public spaces are now only the stuff of legends: Robin Hood’s forest, the Great Plains of the Amerindians, the steppes of the nomadic tribes, and so forth… Rousseau said that the first person who wanted a piece of nature as his or her own exclusive possession and transformed it into the transcendent form of private property was the one who invented evil. Good, on the contrary, is what is common.”
― Antonio Negri Michael Hardt, Impero
tags: common, empire, evil, good, private-property
21 likes
Like

“Why do you accept being treated like an inmate?”
― Antonio Negri, Declaration
tags: autonomy, biopower, capitalism, control, empire, hardt, negri
4 likes
Like


Is this you? Let us know. If not, help out and invite Antonio to Goodreads.