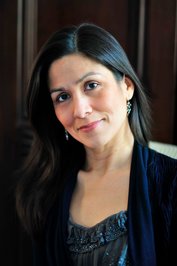 Born
in Baltimore, The United States
Genre
Literature & Fiction
Influences
E.M. Forster, Barbara Kingsolver, Walt Whitman, Ann Patchett
Member Since
September 2011
edit data
Marisa de los Santos is the New York Times bestselling author of LOVE WALKED IN, BELONG TO ME, FALLING TOGETHER, THE PRECIOUS ONE, and her newest novel, which continues with characters from the first two, I'LL BE YOUR BLUE SKY.

Marisa and David live in Wilmington, Delaware with their two children, Charles and Annabel, and their Yorkies, Finny and Huxley. Marisa is currently at work on her sixth novel for adults, I'D GIVE ANYTHING.

Interview with Marisa de los Santos
I began writing poetry because I love the texture of words: the sound, the rhythm, the way they feel in my mouth and the back of my throat. And I...
Read more...
11 likes · 2 comments

“No one is ever quite ready; everyone is always caught off guard. Parenthood chooses you. And you open your eyes, look at what you've got, say "Oh, my gosh," and recognize that of all the balls there ever were, this is the one you should not drop. It's not a question of choice.”
― Marisa de los Santos, Love Walked In
tags: dad, father, mom, mother, parenthood, parenting
243 likes
Like

“It's a well-known fact. All women are clinically insane, but especially ballet dancers. Psycho. extremely psycho. Trust me.”
― Marisa de los Santos, Belong to Me
tags: women-humor
113 likes
Like

“Even if someone wasn't perfect or even especially good, you couldn't dismiss the love they felt. Love was always love; it had a rightness all its own, even if the person feeling the love was full of wrongness.”
― Marisa de los Santos, Love Walked In
107 likes
Like

I was wondering if anyone has read any books by Marisa De Los Santos? If so, did you enjoy it? Marisa de los Santos

“If you imagine the 4,500-bilion-odd years of Earth's history compressed into a normal earthly day, then life begins very early, about 4 A.M., with the rise of the first simple, single-celled organisms, but then advances no further for the next sixteen hours. Not until almost 8:30 in the evening, with the day five-sixths over, has Earth anything to show the universe but a restless skin of microbes. Then, finally, the first sea plants appear, followed twenty minutes later by the first jellyfish and the enigmatic Ediacaran fauna first seen by Reginald Sprigg in Australia. At 9:04 P.M. trilobites swim onto the scene, followed more or less immediately by the shapely creatures of the Burgess Shale. Just before 10 P.M. plants begin to pop up on the land. Soon after, with less than two hours left in the day, the first land creatures follow.

Thanks to ten minutes or so of balmy weather, by 10:24 the Earth is covered in the great carboniferous forests whose residues give us all our coal, and the first winged insects are evident. Dinosaurs plod onto the scene just before 11 P.M. and hold sway for about three-quarters of an hour. At twenty-one minutes to midnight they vanish and the age of mammals begins. Humans emerge one minute and seventeen seconds before midnight. The whole of our recorded history, on this scale, would be no more than a few seconds, a single human lifetime barely an instant. Throughout this greatly speeded-up day continents slide about and bang together at a clip that seems positively reckless. Mountains rise and melt away, ocean basins come and go, ice sheets advance and withdraw. And throughout the whole, about three times every minute, somewhere on the planet there is a flash-bulb pop of light marking the impact of a Manson-sized meteor or one even larger. It's a wonder that anything at all can survive in such a pummeled and unsettled environment. In fact, not many things do for long.”
― Bill Bryson, A Short History of Nearly Everything
tags: history, science, time
267 likes
Like