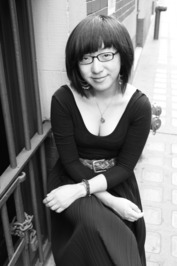 Born
in New York, The United States
Website
http://shinjimoon.com
Genre
Poetry, Nonfiction
Member Since
June 2010
URL
https://www.goodreads.com/shinjimoon
edit data
shinji moon is from new york and currently resides in the pacific northwest, somewhere by the ferns. she is the author of the anatomy of being (lulu 2013).

Shinji Moon is currently reading
The Heart Is a Lonely Hunter
by Carson McCullers
bookshelves: currently-reading

“I look at you and see all the ways a soul can bruise, and I wish I could sink my hands into your flesh and light lanterns along your spine so you know there's nothing but light when I see you.”
― Shinji Moon
tags: lover-mine
384 likes
Like

“I almost miss the sound of your voice but know that the rain
outside my window will suffice for tonight.
I’m not drunk yet, but we haven’t spoken in months now
and I wanted to tell you that someone threw a bouquet of roses
in the trash bin on the corner of my street, and I wanted to cry
because, because —
well,
you know exactly why.

And, I guess I’m calling because only you understand
how that would break my heart.

I’m running out of things to say. My gas is running on empty.
I’ve stopped stealing pages out of poetry books, but last week I pocketed a thesaurus
and looked for synonyms for you but could only find rain and more rain
and a thunderstorm that sounded like glass, like crystal, like an orchestra.

I wanted to tell you that I’m not afraid of being moved anymore;
Not afraid of this heart packing up its things and flying transcontinental
with only a wool coat and a pocket with a folded-up address inside.

I’ve saved up enough money to disappear.
I know you never thought the day would come.

Do you remember when we said goodbye and promised that
it was only for then? It’s been years since I last saw you, years
since we last have spoken.

Sometimes, it gets quiet enough that I can hear the cicadas rubbing their thighs
against each other’s.

I’ve forgotten almost everything about you already, except that
your skin was soft, like the belly of a peach, and
how you would laugh,
making fun of me for the way I pronounced almonds
like I was falling in love
with language.”
― Shinji Moon

“There is a shipwreck between your ribs and it took eighteen years
for me to understand how to understand your kind of drowning.
There are people who cannot be held quietly. There are screams
that are never externalized. If I looked at the photo albums of your
past twenty years, all I would find are decibel meter graphs of
phone calls and the intensity of your silence as you sat
smoking cigarettes in the garage.

There is a shipwreck between your ribs. You are a box with
fragile written on it, and so many people have not handled you
with care.

And for the first time, I understand that I will never know
how to apologize for being
one of them.”
― Shinji Moon
178 likes
Like

“He fell to the seat, she by his side. There were no more words. The stars were beginning to shine. How was it that the birds sing, that the snow melts, that the rose opens, that May blooms, that the dawns whitens behind the black trees on the shivering summit of the hills?
One kiss, and that was all.

Both trembled, and they looked at each other in the darkness with brilliant eyes.

They felt neither the cool night, nor the cold stone, nor the damp ground, nor the wet grass; they looked at each other, and their hearts were full of thought. They had clasped hands, without knowing it.

She did not ask him; did not even think where and how he had managed to get into the garden. It seemed so natural to her that he should be there.

From time to time Marius’ knee touched Cosette’s. A touch that thrilled.
At times, Cosette faltered out a word. Her soul trembled on her lips like a drop of dew on a flower.

Gradually, they began to talk. Overflow succeeded to silence, which is fullness. The night was serene and glorious above their heads. These two beings, pure as spirits, told each other everything, their dreams, their frenzies, their ecstasies, their chimeras, their despondencies, how they had adored each other from afar, how they had longed for each other, their despair when they had ceased to see each other. They had confided to each other in an intimacy of the ideal, which already, nothing could have increased, all that was most hidden and most mysterious in themselves. They told each other, with a candid faith in their illusions, all that love, youth and the remnant of childhood that was theirs, brought to mind. These two hearts poured themselves out to each other, so that at the end of an hour, it was the young man who had the young girl’s soul and the young girl who had the soul of the young man. They interpenetrated, they enchanted, they dazzled each other.

When they had finished, when they had told each other everything, she laid her head on his shoulder, and asked him: "What is your name?"

My name is Marius," he said. "And yours?"
My name is Cosette.”
― Victor Hugo, Les Misérables
517 likes
Like

“There must be quite a few things that a hot bath won't cure, but I don't know many of them.”
― Sylvia Plath
tags: baths
893 likes
Like

“Sometimes people are beautiful.
Not in looks.
Not in what they say.
Just in what they are.”
― Markus Zusak, I Am the Messenger
tags: beauty, life
23644 likes
Like

“The only thing worse than a boy who hates you: a boy that loves you.”
― Markus Zusak, The Book Thief
tags: boys, hate, love
10466 likes
Like

“Maybe everyone can live beyond what they're capable of.”
― Markus Zusak, I Am the Messenger
tags: hope, inspirational, life, philosophy
3569 likes
Like

Michael Ondaatje
author of
The Engli...

Michael Cunningham
author of
The Hours