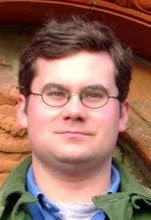 Born
in The United States
Website
http://joshuamreynolds.wordpress.com
Twitter
JMReynolds
Genre
Horror, Fantasy, Science Fiction
Influences
Far too many to count.
Member Since
April 2008
URL
https://www.goodreads.com/jreynolds
edit data
Josh Reynolds’ work has previously appeared in such anthologies as Historical Lovecraft from Innsmouth Free Press and Horror for the Holidays from Miskatonic River Press, and his novel, Knight of the Blazing Sun, is currently available from Black Library. He can be found at: http://joshuamreynolds.wordpress.com

Librarian Note: There is more than one author in the GoodReads database with this name. Josh Reynolds’ work has previously appeared in such anthologies as Historical Lovecraft from Innsmouth Free Press and Horror for the Holidays from Miskatonic River Press, and his novel, Knight of the Blazing Sun, is currently available from Black Library. He can be found at: http://joshuamreynolds.wordpress.com

Librarian Note: There is more than one author in the GoodReads database with this name. ...more

Hi Josh just finished Marriage of Moment and couldnt help but notice you have a Blood Angels novel in the works. So what can we expect in terms of the sons of Sanguinius from Warhammers top vampire guy ?
Joshua Reynolds Vampires...only in spaaaaace!

No but seriously, like with my WHF work, I tried to bridge the gap between the various portrayals of BA in fiction, while…moreVampires...only in spaaaaace!

No but seriously, like with my WHF work, I tried to bridge the gap between the various portrayals of BA in fiction, while sticking to my strengths as a writer. It was a lot different to writing White Scars, I'll say that. Less humor, more introspection.

July was fairly sedate, as far as work goes. I completed a novel-length project – which I still can’t talk about, unfortunately – as well as another short story, titled “Cheyne Walk, 1985”. It’s a Royal Occultist story…of sorts, though perhaps a bit darker than the usual entries in the series.

I also did some lore work for Hi-Rez Studios, and made notes for a project I’ll be working on later this

“You let the city burn so that you would have light to load your guns by.”
― Joshua Reynolds, Fulgrim: The Palatine Phoenix
tags: warhammer, warhammer-40000
1 likes
Like

“He’d heard stories about grot raiders, creeping down from the great spore clouds that blossomed in the dark above the highest peaks to set ambushes in floating wrecks.”
― Joshua Reynolds, Soul Wars
0 likes
Like

Sept-Oct Groupreads: a poll to confirm that a Egyptian Sword & Sorcery theme will work. A few non-Egyptian topics are included. Voting will steer if we have one broad theme vs. two specific books.

“These people who expect to be saints in heaven, though they were not on Earth, have ignored the wisdom of the founders of the great religions. This wisdom is that the kingdom of heaven is within you and that you do not go to heaven unless you are already in it. The magic must be wrought by you and you alone. God has no fairy wand to tap the pig and turn it into a swan.

People ignore this. And those who believe in sinners burning in hell are, perhaps, not so much concerned with going to heaven as with being sure that sinners-–others-–roast forever in the flames.”
― phillip jose farmer
42 likes
Like

“That country where it is always turning late in the year. That country where the hills are fog and the rivers are mist; where noons go quickly, dusks and twilights linger, and midnights stay. That country composed in the main of cellars, sub-cellars, coal-bins, closets, attics, and pantries faced away from the sun. That country whose people are autumn people, thinking only autumn thoughts. Whose people passing at night on the empty walks sound like rain.”
― Ray Bradbury
tags: autumn, dark, fall, quiet
294 likes
Like

“If there is a true universal mind, must it be sane?”
― Charles Fort
23 likes
Like

“If you leave me here," the guy on the floor said, "he'll kill me tomorrow morning."
Parker looked at him. "So you've still got tonight," he said.”
― Richard Stark, Dirty Money
tags: bad-ass, noir, parker
35 likes
Like

“When the phone rang, Parker was in the garage, killing a man.”
― Richard Stark, Firebreak
tags: opening-lines
25 likes
Like

Derrick Ferguson
author of
Dillon an...