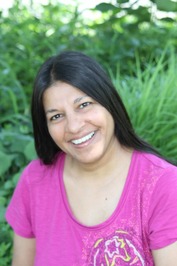 “Colored like a sunset tide is a gaze sharply slicing through the reflective glass. A furrowed brow is set much too seriously, as if trying to unfold the pieces of the face that stared back at it. One eyebrow is raised skeptically, always calculating and analyzing its surroundings. I tilt my head trying to see the deeper meaning in my features, trying to imagine the connection between my looks and my character as I stare in the mirror for the required five minutes.

From the dark brown hair fastened tightly in a bun, a curl as bright as woven gold comes loose. A flash of unruly hair prominent through the typical browns is like my temper; always there, but not always visible. I begin to grow frustrated with the girl in the mirror, and she cocks her hip as if mocking me. In a moment, her lips curve in a half smile, not quite detectable in sight but rather in feeling, like the sensation of something good just around the corner. A chin was set high in a stubborn fashion, symbolizing either persistence or complete adamancy. Shoulders are held stiff like ancient mountains, proud but slightly arrogant.

The image watches with the misty eyes of a daydreamer, glazed over with a sort of trance as if in the middle of a reverie, or a vision. Every once and a while, her true fears surface in those eyes, terror that her life would amount to nothing, that her work would have no impact. Words written are meant to be read, and sometimes I worry that my thoughts and ideas will be lost with time.

My dream is to be an author, to be immortalized in print and live forever in the minds of avid readers. I want to access the power in being able to shape the minds of the young and open, and alter the minds of the old and resolute. Imagine the power in living forever, and passing on your ideas through generations. With each new reader, a new layer of meaning is uncovered in writing, meaning that even the author may not have seen.

In the mirror, I see a girl that wants to change the world, and change the way people think and reason. Reflection and image mean nothing, for the girl in the mirror is more than a one dimensional picture. She is someone who has followed my footsteps with every lesson learned, and every mistake made. She has been there to help me find a foothold in the world, and to catch me when I fall. As the lights blink out, obscuring her face, I realize that although that image is one that will puzzle me in years to come, she and I aren’t so different after all.”
― K.D. Enos

“I’ve been labeled before. I’m supposed to be a jock and then a brain and then one of those music/theater people. I guess I like to keep surprising people. But what kind of life can you live in a tiny square box? My personality is less narrow. I like a lot of different things. But still, people like to be able to put you in a category, to be able to place you in even rows and put a sign at the front. They think the best you can achieve is being at the front of your row…but why not form your own row? Isn’t that the definition of being a leader?

Maybe taking charge means something different nowadays. How come lately people think you’re a leader just because you happen to be at the front of the line? A good leader need only point the way and watch as others follow a direction, not a figure. A great leader can lead without anyone ever knowing it. A spectacular leader can lead without ever knowing it themselves. The person at the front of the line is the puppet of someone that you couldn’t name because someone else pointed the way. I must have missed something. I thought being a follower was letting other people shape your life. I thought it meant letting other people decide who you were going to be.

I won’t conform. I won’t let people class me. Because once you’re there you’re stuck. I will be whoever I want to be, and no one can stop me. I have something they don’t have, which is nothing to lose. I have my entire life to live and I intend to live it the way I would like to live. I will form my own row. I will point in a new direction. If that means going against other peoples’ opinion of normal, then so be it. Who says normal is right? Normal certainly strikes me as a boring way to live my life.”
― K.D. Enos

“Just as the sailor yearns for port, the writer longs for the last line.”
― Alix Christie, Gutenberg's Apprentice
2 likes

Dear Lucinda,
Thanks for your sweet note. I will be reading your reviews as we seem to have some similar tastes! Thank you as well! Saira

Dear Saira,
I would like to thank you for the unexpected but apsolutely lovely friendship request here on GoodReads. I am so pleased that you thought my taste in books and interests in writing and equine related stuff was interesting to you. Feel free to read my reviews (which i constantly add to), and bookshelfs. Discuss, recomend and ask. Thank you once again.
Kind Regards
Lucinda x