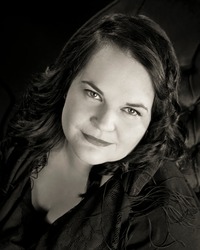 A life-long fan of 19th Century Gothic literature, she is a hopeless romantic and loves Victorians, steampunk, fairies, fantasy monsters, the Fin de siècle, and the correct way to drink absinthe. She also likes Medieval stuff, pirates, zombies, space operas and all subjects in between.

Her debut – the first in a series of Edwardian Steampunk Novels published by Random House/Del Rey is out now.

She is also currently busy with her doctorate in English and Creative Writing at Brunel University. She chooses to live in London because she loves weather there.

A Conspiracy of Alchemists has won an Award

I'm so excited to announce that my novel, A CONSPIRACY OF ALCHEMISTS won the RNA award for best debut novel for 2013.

This is a huge honour as the award has been given to a debut novelist since 1964.

“Of all the arrogant men in this world, you are possibly the worst.”
― Liesel Schwarz, A Conspiracy of Alchemists
4 likes
Like

“Their mouths met. The touch of his lips sparked an energy that plunged to the very depths of her. In that moment, she knew that this was the one kiss of her life. It was the touch of him she would remember forever. The kiss she would dream of when she was lonely. It was the kiss she would relive when she was alone. It would transcend the physical, the realms of Shadow and Light. All other kisses that followed, if there ever were any, would not compare.”
― Liesel Schwarz, A Conspiracy of Alchemists
3 likes
Like

“There can be no more noble a quest than a man seeking to rescue his beloved.”
― Liesel Schwarz, A Conspiracy of Alchemists
3 likes
Like

Lucinda wrote: "Dear Liesel,
Ild like to thank you so much for being my friend here on Goodreads. I concider myself to have been extremely lucky to have had the oportunity of reading your debut novel "A Conspiracy..."

Thank you Lucinda! Have you received an ARC for A Clockwork Heart Yet? Do let me know and I'll make sure you get one.

Dear Liesel,
Ild like to thank you so much for being my friend here on Goodreads. I concider myself to have been extremely lucky to have had the oportunity of reading your debut novel "A Conspiracy of Alchemists" to review. It was an outstanding Edwardian Steampunk adventure and i do lok forward to reading more of your work in the future.
Kind Regards
Lucinda x

P.S- If you would like someone to read & review "A Clocwor Heart" then i would be more than happy to.