The Art Of Suspending Your Disbelief

Zacharias Cornelius Vanderbron was a man who was truly full of faith. His appearance also reflected this, with confidence-inspiring glasses, a hairstyle in which every hair was neatly in place, a decent clothing style, a step with no doubt, and a serious, determined look in his eyes.
No one was ever as adept at the art of believing as he was. When he went to church, he believed in a god who had made the world, reigned affectionately, and fathered a son who rose from the dead to save mankind. If he was working, he believed in market forces, the right of the strongest, and the unbridled goodness of ambition.
He often went on business trips, and he came to the end of the day, sometimes in a nightclub, believing in his wildest imagination. When he came home, he was with his family, where he believed in the faithfulness of his wife and a bright future for his children, because they had exemplary behavior, performed well at school, and did an excellent job in their sports.
He did not think much about his life, and had you asked him if he was happy, he would probably have answered with something in the spirit of “Sure, why not?” And, well, who says it must be more complicated than that? If you’re happy because you do not see a reason not to be, then maybe it’s true.

One day, Zacharias received a postcard at his work address. On the front was a beautiful image of an idyllic mountain landscape, with a clear, rippling river; on the back, the following text:
“It’s not true. Sorry. Cheers, P.”
He really could not figure out who this P. could be. He had acquaintances whose first or last name started with a P, but there was really no one who would shorten their name to a letter. Moreover, he could not relate that sentence to anyone — not even someone whose name did not start with a P.
But what occupied him the most was the message that something was not true. He started to wonder what specifically was not true. Something he had very positively claimed? Was it something in his faith? Did something not work in his work? Was there something that one of his customers had claimed? Had something gone wrong during a nightclub visit? Was his wife always honest with him? Was anything wrong in the lives of his children?
It did not let him go. At church, he listened to the sermon with growing doubts. At work, he doubted what he was doing, as well as his goals, his relationships, and his ambitions. He started to feel more and more insecure about his nightclub visits; he was ashamed of his fantasies. And he even doubted his wife’s faithfulness and the bright futures of his children.
His doubt kept growing. He went to sleep worse, did his job less well, no longer came into the church, and, at home, developed a mounting tension between him and his wife and children. In short, it went downhill with him on all fronts. He was no longer sharp enough when doing business, so he went bankrupt. He became less and less attentive, more and more crippled and suspicious of his wife, and she finally left him, his children suffered badly from all that and subsequently performed miserably in school and sports.

Nobody asked him, but he now saw a number of reasons for not being happy.

And so one day, he was sitting on a lonely bench in a desolate park with the postcard in his hand, staring defenselessly at the idyllic mountain landscape. Only then did he see that this picture wasn’t quite right in some aspects. The sky was a bit too blue, the trees a bit too green, the light a bit too bright. But hey, he thought, it’s just a beautiful picture. He closed his eyes and walked through the landscape, felt the bright sun on his skin, filled his lungs with fresh mountain air, and listened to the clear babbling water.
For a moment, this was sufficient for him to be happy.

We humans can only perceive a part of our world and of course this limits our knowledge. We might know much more if we could perceive in more dimensions and see all colors, types of radiation, and dark matter. 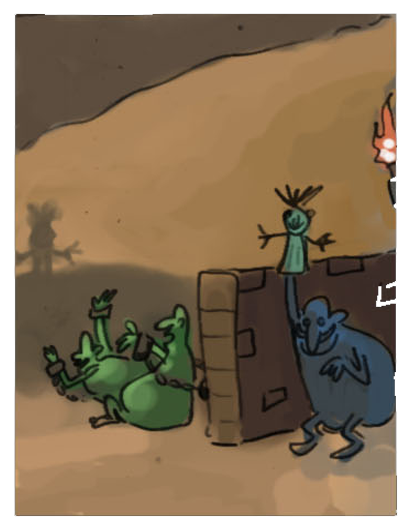 What we experience as truth may perhaps come by chance in the vicinity of the absolute truth, but it may not do so at all.
We should know that there is a lot that we don’t know.

Long ago, the Greek philosopher Plato illustrated a similar view with the example of a cave where people live who have never been outside. They are bound there in such a way that they can only see the wall of the cave and cannot look back.

Behind their backs, some light comes in, and some things from the outside world cast shadows on the cave wall. They see shadows of animals, trees, plants, and so on, from which they form an idea of the world.

They thus have a very limited picture of the world. They see everything only in hazy forms, in shades of gray, and in two dimensions, but they don’t have a way of knowing any better.

If anyone who visited the outside world would tell them what everything ally looked like out there, most of the cave-dwellers would probably not believe it and stick to the ideas that are familiar to them. 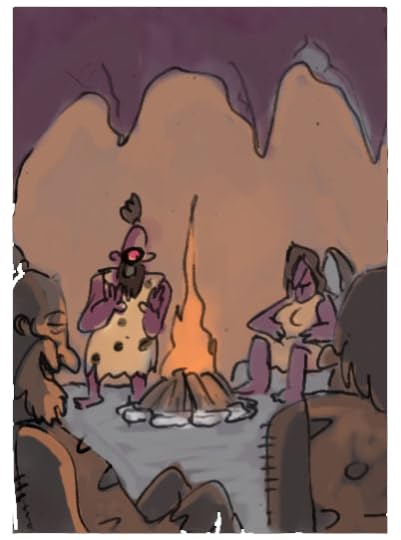 But let’s consider another aspect of human nature. Let’s imagine a cave where humans live with a bit more freedom. There are undoubtedly a few who will dress up things. They’ll put candles down, paint the walls, chop some beautiful statues from the rocks. Perhaps they will even hang a nice flowery curtain in front of the entrance.

They might put some rocks in a circle around a fire, where they’ll tell each other exciting stories or do a nice dance, and before you know it, they have made the drab, chilly cave into a really cozy place.

They’ll have enchanted the space with their creativity, and it is no longer a cold cave but is instead a place that really belongs to them. A place where they feel at home.

What would they do when it comes back to report on what is out there? Would they be ready to believe? Or would they tend to stick to the ideas that are familiar to them?