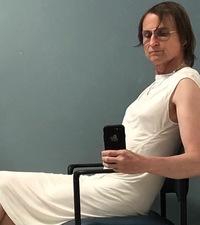 Born
Newcastle, Australia
Website
https://www.newschool.edu/lang/faculty/mckenzie...
Twitter
mckenziewark
Genre
Social Sciences, Philosophy, Computers & Internet
edit data
McKenzie Wark (she/her) is the author of A Hacker Manifesto, Gamer Theory, 50 Years of Recuperation of the Situationist International, and The Beach Beneath the Street, among other books. She teaches at the New School for Social Research and Eugene Lang College in New York City.

“In Japan itself it seemed as if theory had been absorbed the same way Japanese media culture absorbed everything else—by turning it into a spectacular subcultural style.”
― McKenzie Wark, General Intellects: Twenty-One Thinkers for the Twenty First Century
2 likes
Like

“We act in and against a world that remains other to us. Reduced to nothing but users, and our actions forced into the commodity form, our collective work and play produces a world over and against us, one that massively persists in its own habits of functioning.53 Worse, collective human labor made a world for a ruling class that keeps making not only itself but us in its image.”
― McKenzie Wark, Capital is Dead: Is This Something Worse?
0 likes
Like

Is this you? Let us know. If not, help out and invite McKenzie to Goodreads.