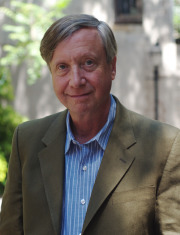 Born
in New York, New York, The United States
February 21, 1951
Genre
History
edit data
Sean Wilentz is the George Henry Davis 1886 Professor of American History at Princeton University. His many books include The Politicians and the Egalitarians: The Hidden History of American Politics (2016); Bob Dylan in America (2010); and The Age of Reagan: A History, 1974–2008 (2008). The Rise of American Democracy: Jefferson to Lincoln (2005) was awarded the Bancroft Prize, and he has received two Grammy nominations for his writings on music.

· 21,287 ratings · 2,090 reviews · 54 distinct works • Similar authors
More books by Sean Wilentz…
Quotes by Sean Wilentz  (?)
Quotes are added by the Goodreads community and are not verified by Goodreads. (Learn more)
“The Gates of Eden,” as he called it that night, took us furthest out into the realm of the imagination, to a point beyond logic and reason. Like “It’s Alright, Ma,” the song mentions a book title in its first line, but the song is more reminiscent of the poems of William Blake (and, perhaps, of Blake’s disciple Ginsberg) than it is of Tolstoy’s War and Peace, vaunting the truth that lies in surreal imagery. After an almost impenetrable first verse, the song approaches themes that were becoming familiar to Dylan’s listeners. In Genesis, Eden is the paradise where Adam and Eve had direct communication with God. According to “Gates of Eden,” it is where truth resides, without bewitching illusions. And the song is basically a list, verse after verse, of the corrosive illusions that Dylan would sing about constantly from the mid-1960s on: illusions about obedience to authority; about false religions and idols (the “utopian hermit monks” riding on the golden calf); about possessions and desire; about sexual repression and conformity (embodied by “the gray flannel dwarf”); about high-toned intellectualism. None of these count for much or even exist inside the gates of Eden. The kicker comes in the final verse, where the singer talks of his lover telling him of her dreams without any attempt at interpretation—and that at times, the singer thinks that the only truth is that there is no truth outside the gates of Eden. It’s a familiar conundrum: If there is no truth, isn’t saying as much really an illusion, too, unless we are all in Eden? (“All Cretans are liars,” says the Cretan.) What makes that one truth so special? But the point, as the lover knows, is that outside of paradise, interpretation is futile. Don’t try to figure out what the song, or what any work of art, “really” means; the meaning is in the imagery itself; attempting to define it is to succumb to the illusion that truth can be reached through human logic. So Dylan’s song told us, as he took the measure in his lyrics of what had begun as the “New Vision,” two and a half miles up Broadway from Lincoln Center at Columbia, in the mid-1940s. Apart from Dylan, Allen Ginsberg and Gregory Corso may have been the only people in Philharmonic Hall who got it. I”
― Sean Wilentz, Bob Dylan in America
1 likes
Like

“The antislavery Vermont Republican Charles Rich delivered a full refutation of the slaveholders, and with it a summation of an emerging antislavery constitutionalism.104 Although it pained him to oppose his longtime southern Republican allies, Rich said, he found it impossible to square the first principles of either the Declaration of Independence or the preamble of the Constitution with slavery. Although slavery existed at the nation’s founding, this misfortune hardly necessitated slavery’s continued existence. “By what charter of a national character,” he asked, “[has] a right to hold a human being in slavery … ever been recognised?” The absence of the word “slavery” in the Constitution signaled that, although “for obvious reasons, [the framers] were obliged indirectly to admit the fact of its existence, they purposely, and very carefully, avoided the use of any expressions from which, by fair construction, even an argument could be derived in favor of its legitimacy.” Any justification for slavery would have to be derived “by a reference to the laws of nature and natural rights, and not to the Constitution.” As slavery was strictly an unfortunate local institution, Rich asserted, Americans had an obligation, in accord with the laws of nature and natural rights, to prevent its extension, The Missouri question presented to the nation an irrevocable choice: Hitherto, slavery has not been so recognized by the General Government, as to cause our national character to be materially affected by it; for, although there are States in the Union which, from the necessity of the case, may be termed slave-holding States, it cannot, with truth, be alleged that, as a nation, we have permitted slavery. But if, under present circumstances, Congress shall solemnly decide that it cannot restrain the unlimited extension of it, and that a want of power to do so results from an unqualified recognition of it by the Constitution, our national character will become identified with it; and instead of its being, as heretofore, a local malady, and susceptible of cure, it must henceforth be regarded as affecting the whole system, and past the hope or possibility of a remedy. Rich bade his colleagues and countrymen to join in limiting “an evil which cannot at present be removed” or “diminished by dispersion”—hemming it in and keeping it a local institution “till removed, and our national character thereby preserved.”105”
― Sean Wilentz, No Property in Man: Slavery and Antislavery at the Nation’s Founding, With a New Preface
0 likes
Like

Is this you? Let us know. If not, help out and invite Sean to Goodreads.