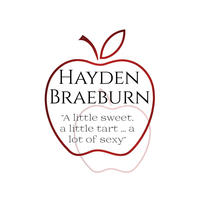 Born
in The United States
Website
http://haydenbraeburn.com
Twitter
HaydenBraeburn
Genre
Romance, Suspense, Contemporary
Member Since
October 2010
URL
https://www.goodreads.com/HaydenBraeburn
edit data
A Virginia native, Hayden Braeburn now finds herself among the bluegrass and rolling hills of Kentucky. Married to her own (former) Marine, and mother to two incredible children, she toils at a day job she actually loves, writing whenever she has a free minute.

Man, I am BAD at this Blogging Thing

So, yeah, it’s been… WAY too long since I wrote a post, but I have been working on another book, so there’s that, right?

If you’re following on Twitter and/or Facebook, you might’ve caught the cover for DECEIVE, the next book on tap. This book is the first in the Aylesford series but is following characters you know well from the Everett series, Chris Delmonico and Tiffany Morgan. It’s nice to fina

The Everetts of Tyler (3 books)
by
Hayden Braeburn (Goodreads Author)

“Davis looked Priscilla up and down. “You're going with insanity?” He frowned. “In this case, I think it might work.” “I'm not insane!” Priscilla protested. “Mason is mine. He doesn't want me, so he has to die,” she stated plainly. “The other man was in the way. I didn't mean to shoot him.” She wiped at her tears with her manacled hands. “Just Mason.”
― Hayden Braeburn, Dance With Me
0 likes
Like

“Have you ever fought an opponent you had no defense against? Like a fire breather or an acid spitter?"
"Once I faced a female with diamond skin," Nix said breathlessly. "I was transfixed - even as she was choking the life out of me."
"Really?"
"No, I saw that character on X-Men. I just wanted to commiserate. Alas, I have no weaknesses.”
― Kresley Cole, Pleasure of a Dark Prince
622 likes
Like

“Truth is stranger than fiction, but it is because Fiction is obliged to stick to possibilities; Truth isn't.”
― Mark Twain, Following the Equator: A Journey Around the World
tags: books, truth
5823 likes
Like

“I realized that the one person who could break my heart is the only one who should have it.”
― Julie James, Just the Sexiest Man Alive
523 likes
Like

“Nick watched as Jordan sipped her wine and made The Face-the seductive, the hell-with-wine-you-should-see-what-I-look-like-having-sex face. At least that was how he interpreted it.
Watching her with a predatory gaze, the douchebag grinned.
Apparently, he had a similar interpretation of The Face.
Something inside Nick snapped.
That was his fake girlfriend in there. Sitting at the table where they had just shared cheese fries the night before. And if she thought she could throw scorching hot sex-looks to any pansy-ass scarf-boy who wandered into her shop, she had another think coming.
He had a look of his own to show the douchebag.
It was time to break out the don't-fuck-with-me-face.”
― Julie James, A Lot like Love
45 likes
Like

Romance for all seasons and all occasions — 165 members — last activity Dec 23, 2016 02:52PM
This is a group for people who love romance.Everyone who ever loved, loves or wants to love is welcomed.

Hi Hayden, I'm sorry it took so long to stop by but I wanted to let you know that I'm pleased to meet you and look forward to discussing books with you. If you ever have any questions about any of the titles on my shelves or about eHarlequin.com and all it has to offer, please ask. I'll be happy to answer. I’ll also have Harlequin news updates on my profile on a regular basis so be sure to stop by to keep up on everything Harlequin!