,
Discover new books on Goodreads
See if your friends have read any of Scott Peters's books 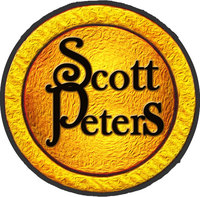 2. Be honestly, fully interested in the people around you. Only by puttin…moreHere are seven thoughts for aspiring writers:

2. Be honestly, fully interested in the people around you. Only by putting yourself in many diverse pairs of shoes can you begin to write fully formed characters.

3. Know that you must be okay with spending a great deal of time alone.

4. Realize that every book you write, no matter how exciting, requires a big commitment and some degree of agony--whether you're a beginning or seasoned writer.

6. Study sentence structure. Brush up on all that grammar stuff you learned in school, especially the stuff you glazed over... now it will seem pretty interesting!

More of Scott's books…
Quotes by Scott Peters  (?)
Quotes are added by the Goodreads community and are not verified by Goodreads. (Learn more)
“Japanese killed his dad when they bombed Pearl Harbor, Hawaii. That was over three years ago now: December 7th, 1941, two and a half weeks before the worst Christmas of his life. He, Mom, and Sammy were shattered, lost without him. The Japanese had broken his family. The sooner he could fight the enemy, the better. They had to be stopped. He owed it to”
― Scott Peters, I Escaped The World's Deadliest Shark Attack
0 likes
Like

“writing”
― Scott Peters, Mystery of the Egyptian Mummy
0 likes
Like

“How was it connected to the scarab thefts?”
― Scott Peters, Zet and the Egyptian Amulet Mystery
0 likes
Like

“Stop acting so small. You are the universe in ecstatic motion.”
― Rumi
6450 likes
Like