Discover new books on Goodreads
See if your friends have read any of Marjorie F. Baldwin's books 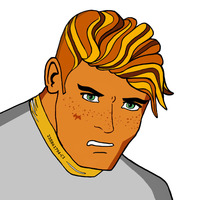 Currently working on THE PHOENICIAN SERIES:
When Minds Collide (Short #0.1)
Man Made Man (Book #1)
A First Time for Everything (Short #1.1)
Conditioned Response (Book #2)

http://about.me/FridayBaldwin
Tweets: @phoenicianbooks
Author Facebook: http://www.facebook.com/fridaybaldwin
Books Facebook: http://www.facebook.com/phoenicianseries Author of Classic SciFi, the "what-if" sort that focuses more on social issues than space wars, may have some supernatural elements but is not fantasy and will always be marked by an EPIC LENGTH. Although long, my stories seem to read very quickly for nearly everyone. I think it's the amazing people populating my worlds!

Currently working on THE PHOENICIAN SERIES:
When Minds Collide (Short #0.1)
Man Made Man (Book #1)
A First Time for Everything (Short #1.1)
Conditioned Response (Book #2)

The best week of the year is half over and more than half of the Phoenician Series is on sale - have you picked up your cheap or free copies of the books yet? Get all four here:

“When a dead man knocks on the car window, I think fainting is a reasonable response.”
― Marjorie F. Baldwin
tags: at-the-right-place, in-the-wrong-time
5 likes
Like

“The past only exists in the minds of those who choose to recall it.”
― Marjorie F. Baldwin, Conditioned Response
tags: kyree, phoenician-series, seven-chiefs, shayla
4 likes
Like

“Brennan didn’t look exactly like Raif to Shayla’s eyes, but for someone who didn’t know either man particularly well, they probably looked like twins, separated at birth by twenty or so years.”
― Marjorie F. Baldwin, Conditioned Response
tags: brennan, conditioned-response, raif, shayla
1 likes
Like

Author of the Month - October

“Reputation is what other people know about you. Honor is what you know about yourself.”
― Lois McMaster Bujold, A Civil Campaign
tags: inspirational, sci-fi, vorkosigan
3134 likes
Like

“Some prices are just too high, no matter how much you may want the prize. The one thing you can't trade for your heart's desire is your heart.”
― Lois McMaster Bujold, Memory
330 likes
Like

“The past only exists in the minds of those who choose to recall it.”
― Marjorie F. Baldwin, Conditioned Response
tags: kyree, phoenician-series, seven-chiefs, shayla
4 likes
Like

“People and relationships never stop being a work in progress”
― Nora Roberts, Vision in White
121 likes
Like

“Heroism's just doing more than you want to do or think you can. Sometimes it's just doing the crappy things, the unhappy things other people won't do....It's not just jumping out of a plane onto a glacier ten thousand feet up because there's nobody else there to do it. It's getting out of bed in the morning when it seems like too much trouble.”
― Nora Roberts, Northern Lights
24 likes
Like

THE Group for Authors! — 11906 members — last activity 23 minutes ago
This is a group for authors to discuss their craft, as well as publishing and book marketing.
More of Marjorie’s groups…

Robert A. Heinlein
author of
Stranger ...

mark wrote: "you may be right about GR removing my review (or telling me to remove it).... but maybe not. under their Flag Review guidance, they actually make it clear that they will not remove reviews due to l..."

We shall see. I'll be interested to hear the followup and may well miss it, being offline for a couple days to work the day job. Be sure to let me know what happens :) Oh, and the phrasing "due to language" makes me wonder if their concern is with free speech. That'd be nice, if true.

you may be right about GR removing my review (or telling me to remove it).... but maybe not. under their Flag Review guidance, they actually make it clear that they will not remove reviews due to language...

Hmmm, interesting, that might be why guys seem to enjoy Conditioned Response so much more (so far anyway). I think the presence of sex misleads the female readers into thinking it's supposed to be a romance. It's romantic SF but not an SFR. The "Contract with Reader" requires the Hero and Heroine to end up in a HEA together for it to be a romance :) Without giving away too much (view spoiler)[Raif dies so he and Shayla cannot end up together and she has sex with so many other men before, during and after, Raif has perfectly good cause to be pissed off and jealous if you ask me. But I wrote the book ;-) (hide spoiler)] I don't really think there's as much action as there could be but at the end, when Shayla and Julia each, separately, go off to battle (a sweet little role reversal there, eh?) I definitely think Julia is one kickass killer :) But she always has been. She's kickass all over Book 1. She just doesn't get much stage time in Book 2 anymore. She did before the edits (puzzle puzzle)

Yeah, it was The Borg Collective's slogan, Resistance is Futile in the Star Trek: The Next Generation (ST:TNG) series. I often talk about "the power of the Collective" referring to the Indie Author community and how we can/should help each other. I can't say "the Collective" without thinking of the Borg :) I'm a SUCH a geek grrl Trekkie! I still watch reruns of ST:TNG on BBCAmerica. (swooning at Jean-Luc = it's that English accent hitting my Boston ears)

I wish I were getting to just kick back and BBQ but not only are grills illegal where I live (threat of fire is real, sadly; idiots abound everywhere) sadly, I have to work this weekend. The sucky day job demands most of today/tonight but really, publicizing the book this weekend is critical to kicking off my sales. It only hit the stores 2 weeks ago. I need to sell sell sell (ugh, ironically, I hate sales)

Hope I'll see you DELURKING to join the discussion on Conditioned Response in June over the SciFi and Heroic Fantasy Group! BBQ an extra steak for me, okay? Not too crispy, but no longer thinking of walking off the grill. And be sure to have something icy cold to go with them :) Mmm, steak. Part of the old life I had up north when I still had money. OMG I'm a "Poh Southunnah" LOL Never! I'm a Yankeegrrl to the death!