Discover new books on Goodreads
See if your friends have read any of John C. Wright's books 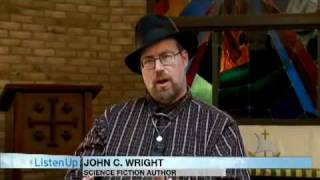 John C. Wright isn't a Goodreads Author (yet), but he does have a blog, so here are some recent posts imported from his feed.

Marvel’s DR STRANGE was not only the first comic I ever read as a teen, but it has remained my favorite from that day to this. So it is with some hope and excitement that I see he has finally been given the big production film treatment with an A-list actor.

Aside from an obscure television pilot, which I also recall fondly albeit it was not without its flaws (they turned the Ancient One into a Whi

Count to the Eschaton Sequence (6 books)
by
John C. Wright

The War of the Dreaming (2 books)
by
John C. Wright

“If atheism solved all human woe, then the Soviet Union would have been an empire of joy and dancing bunnies, instead of the land of corpses.”
― John C Wright
tags: atheism
75 likes
Like

“Truth does not become more or less true, whether those who know it are many or few.”
― John C. Wright, The Golden Age
19 likes
Like

“All medieval and classic cultures of the ancient world, including those on which Tolkien modeled his elves, routinely exposed their young and marriageable women to the fortunes of war, because bearing and raising the next generation of warriors is not needed for equality-loving elves.
Equality-loving elves. Who are monarchists. With a class system. Of ranks.
Battles are more fun when attractive young women are dismembered and desecrated by goblins! I believe that this is one point where C.S. Lewis, J.R.R. Tolkien, and all Christian fantasy writers from before World War Two were completely agreed upon, and it is a point necessary in order correctly to capture the mood and tone and nuance of the medieval romances or Norse sagas such writers were straining their every artistic nerve and sinew to create.
So, wait, we have an ancient and ageless society of elves where the virgin maidens go off to war, but these same virgin maidens must abide by the decision of their father or liege lord for permission to marry?
-- The Desolation of Tolkien”
― John C. Wright, Transhuman and Subhuman: Essays on Science Fiction and Awful Truth
tags: movies, peter-jackson, tolkien
13 likes
Like

DECEMBER FANTASY: This poll decides which two books move on to the run-off poll for December 2011 Fantasy Book of the Month.