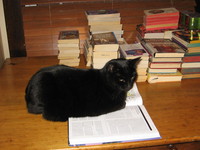 Wendy Welch rated a book it was ok
I'm OK - You're OK
by Thomas A. Harris
bookshelves: currently-reading

“Anyone getting starry-eyed about owning a bookstore should ask herself a few questions: Can you lift a box weighing fifty pounds? Do you know what cat pee on paper smells like and can you get it out? Will you exude patience while solving puzzles that start "I'm looking for a book..." and peter out somewhere between "it has 'The' in the title" and "It has a red cover and the author was a soldier whose last name started with S. Or was it Z?”
― Wendy Welch, The Little Bookstore of Big Stone Gap: A Memoir of Friendship, Community, and the Uncommon Pleasure of a Good Book
11 likes
Like

“I remember as a very young child being warned that libraries and bookstores were quiet places where noise wasn’t allowed. Here was yet another thing the adults had gotten wrong, for these book houses pulsed with sounds; they just weren’t noisy. The books hummed. The collective noise they made was like riding on a large boat where the motor’s steady thrum and tickle vibrated below one’s sneakers, ignorable until you listened, then omnipresent and relentless, the sound that carried you forward. Each book brimmed with noises it wanted to make inside your head the moment you opened it; only the shut covers prevented it from shouting ideas, impulses, proverbs, and plots into that sterile silence.”
― Wendy Welch, The Little Bookstore of Big Stone Gap: A Memoir of Friendship, Community, and the Uncommon Pleasure of a Good Book
tags: books, bookshops, bookstores, libraries, quiet
9 likes
Like

“Third places are those needed spaces, neither home nor work, where we are known by our names and valued for being whatever we decide to be -- the clown, the intellectual, the quiet person. Being part of a family is a wonderful thing, and I'm all for team-building at work, but having a place where you don't have to be anything to anyone makes a pleasant breather.”
― Wendy Welch, The Little Bookstore of Big Stone Gap: A Memoir of Friendship, Community, and the Uncommon Pleasure of a Good Book
8 likes
Like


The Readers of Broken Wheel Recommend

by Katarina Bivald Reminiscent of The Guernsey Literary and Potato Peel Pie Society, this is a warm, witty book about friendship, stories, and love.
6 votes 33.3%
The Book of Speculation

by Erika Swyler A sweeping and captivating debut novel about a young librarian who is sent a mysterious old book, inscribed with his grandmother's name. What is the book's connection to his family?

4 votes 22.2%
The Little Bookstore of Big Stone Gap: A Memoir of Friendship, Community, and the Uncommon Pleasure of a Good Book

by Wendy Welch A book about losing your place, finding your purpose, and immersing yourself in what holds community, and humanity, together—books
3 votes 16.7%
The Little Paris Bookshop

by Nina George Internationally bestselling and filled with warmth and adventure, The Little Paris Bookshop is a love letter to books, meant for anyone who believes in the power of stories to shape people's lives.
2 votes 11.1%
First Impressions: A Novel of Old Books, Unexpected Love, and Jane Austen

by Elizabeth McCracken An unusual love story about a little librarian on Cape Cod and the tallest boy in the world, "The Giant's House" is the magical first novel from the author of the 1994 ALA Notable collection Here's Your Hat, What's Your Hurry.
1 vote 5.6%
The Library of Unrequited Love

by Sophie Divry One morning a librarian finds a reader who has been locked in overnight.
1 vote 5.6%
18 total votes
comments and details
Sign in to vote »

M.L. wrote: "Really. Five stars for "The Road"? Wendy...come on. I thought I was the one who liked the dark side of things. You're supposed to be the happy one!"

But seriously, doesn't The Road make you want to live so as to ensure The Big What If never happens? This book made me a better Quaker. . . and gave me the complete creeps. And reinforced my belief in the power of innocence.

Although I do think the author was just trying creep readers out at one point; there was no need to gild the lily - or in this case, paint the dead rose black - with that baby scene. That was just "how low can I go" nastiness. He'd been plenty low by then.

Okay, one more thing. For how many people in the world is horror and innocence mixed a reality rather than a self-indulgent, ward-off magic read (if I read this, it won't happen). For all its power, The Road holds an unlikely premise as to how a war of that type would work (although as Asimov said, every writer gets one improbable premise per book). What if the war looks like Sierra Leone or Rwanda - people keep coming through and killing everyone you know and then you don't have any food? Was The Road horrible because it was the end of western civilization, or because it implied Americans would hit the survival-of-the-meanest points other people have to live with now?

Okay, so I clearly need to lighten up. Maybe I should read a Meg Cabot novel next . . .

Really. Five stars for "The Road"? Wendy...come on. I thought I was the one who liked the dark side of things. You're supposed to be the happy one!