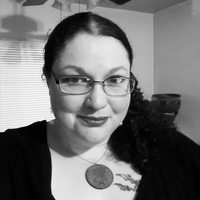 Renee has four children. Her daughters are 15 and 10. Her sons 5 and 2.
She is married to a fellow book lover and their house has more bookshelves than anything else.

Four cats keep Renee as their pet. Two old grumpy males, and two females. One neurotic and one who tries to eat her hair for attention.

Renee loves bats, dinosaurs and is passionate about women's reproductive rights and equality.

As a small child, she wanted to be a vampire more than a princess and filled notebooks and old floppy disks with stories. She prefers to lend a dark tinge to her writing.

Her stupid su Renee Lake is a 36-year-old Puerto Rican from Utah. She has a bachelor’s degree in Healthcare Administration and Management. She currently works in the world of locums.

Renee has four children. Her daughters are 15 and 10. Her sons 5 and 2.
She is married to a fellow book lover and their house has more bookshelves than anything else.

Four cats keep Renee as their pet. Two old grumpy males, and two females. One neurotic and one who tries to eat her hair for attention.

Renee loves bats, dinosaurs and is passionate about women's reproductive rights and equality.

As a small child, she wanted to be a vampire more than a princess and filled notebooks and old floppy disks with stories. She prefers to lend a dark tinge to her writing.

Her stupid super-hero power is the ability to hear a song once and be able to sing it back.

When she's not taming crazy kids or working full time she is writing. You can also find her exploring the wilds of Thedas or shopping at the Citadel.

She has several novels for sale through Smashwords and amazon.com. Some under her maiden name: Renee Travis

Her gender-bent Dracula retelling: Blood Born is currently available from Fire and Ice Ya

You can see more of her flash fiction soon at Spider Road Press and Nightingale and Sparrow.

Could I trouble you for the names of the rest of the books in the Eternity Witches series? I purchased Book One, Dark Magic under the impression it was a stand alone book. Thanking you in advance, Alisha
Renee Lake The additional novels haven't been released yet. Thanks for purchasing however :)
flag
How do you deal with writer’s block?
Renee Lake By writing something different. I stop on my current book and try something else. Like poetry.
flag
See all 7 answers from Renee Lake…

I am so pleased to announce that Blood Born is now available from Fire and Ice YA.

Right now there is a giveaway and it is on Net Galley.

“The heart is a mystical thing. It keeps us alive by pumping blood to every part of our body. It is a strong organ which scientists say has no memory. But the heart is also a thing of great speculation and power; spoken, written, and even put into songs, by many great authors, singers, actors and poets around the world. The heart is supposed to be the center of love, feeling, loneliness and heartbreak.
And it was that organ, that great red Valentine's Day sought-after-object that was at present causing me trouble”
― Renee Travis, Rose Blossom
5 likes
Like

“I don't know how we came to be, I only know that we are beings”
― Renee Travis
2 likes
Like

“They tore out my heart, put it on display, and the whole world looked upon it and laughed.”
― Renee Travis
2 likes
Like

“I'm selfish, impatient and a little insecure. I make mistakes, I am out of control and at times hard to handle. But if you can't handle me at my worst, then you sure as hell don't deserve me at my best.”
― Marilyn Monroe
tags: attributed-no-source, best, life, love, mistakes, out-of-control, truth, worst
151844 likes
Like

“A room without books is like a body without a soul.”
― Marcus Tullius Cicero
tags: attributed-no-source, books, simile, soul
121569 likes
Like

“Never trust anyone who has not brought a book with them.”
― Lemony Snicket, Horseradish
tags: books, reading
26711 likes
Like

“I believe in everything until it's disproved. So I believe in fairies, the myths, dragons. It all exists, even if it's in your mind. Who's to say that dreams and nightmares aren't as real as the here and now?”
― John Lennon
tags: beatles, dragons, dreamers, dreaming, dreams, fairies, faith, mythology, nightmares, reality, truth
8370 likes
Like

“The drug of love was no escape, for in its coils lie latent dreams of greatness which awaken when men and women fecundate each other deeply. Something is always born of man and woman lying together and exchanging the essences of their lives. Some seed is always carried and opened in the soil of passion. The fumes of desire are the womb of man's birth and often in the drunkeness of caresses history is made, and science, and philosophy. For a woman, as she sews, cooks, embraces, covers, warms, also dreams that the man taking her will be more than a man, will be the mythological figure of her dreams, the hero, the discoverer, the builder....Unless she is the anonymous whore, no man enters woman with impunity, for where the seed of man and woman mingle, within the drops of blood exchanged, the changes that take place are the same as those of great flowing rivers of inheritance, which carry traits of character from father to son to grandson, traits of character as well as physical traits. Memories of experience are transmitted by the same cells which repeated the design of a nose, a hand, the tone of a voice, the color of an eye. These great flowing rivers of inheritance transmitted traits and carried dreams from port to port until fulfillment, and gave birth to selves never born before....No man and woman know what will be born in the darkness of their intermingling; so much besides children, so many invisible births, exchanges of soul and character, blossoming of unknown selves, liberation of hidden treasures, buried fantasies...”
― Anaïs Nin, The Four-Chambered Heart: V3 in Nin's Continuous Novel
160 likes
Like

Carrie Ryan
author of
The Fores...

Thank you for the friend request. I like my reading to be eclectic.

Only just got online and I have to say the new After Realm cover is so pretty!!! It feels more like the story! :)

Thank you for the friend request :) !

I do indeed like P.C. Cast, well, the House of night novels at least.

I see you have three works out at the moment, are you still writing?

Yes I have a self published novel due out this month and am currently submitting an erotica novella to Carnia press for their holiday collection, so hopefully it goes over well.

Thank you for the friend request :) !

I do indeed like P.C. Cast, well, the House of night novels at least.

I see you have three works out at the moment, are you still writing?

Hi Renee! Thanks for adding me. It's always lovely to meet fellow writers! :) See you around on Goodreads.

Ooh, how sensational! I love it when publishers customize the classics for children. Good for you, for getting your children hooked early. ;)

Thanks for adding me as a friend! I look forward to talking books with you!

Hi Renee! Nice to meet you and I look forward to seeing you around on here! :)