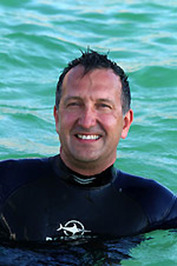 Born
March 09, 1959
edit data
Mark Carwardine is a zoologist who achieved widespread recognition for his Last Chance to See conservation expeditions with Douglas Adams, first aired on BBC Radio 4 in 1990. Since then he has become a leading and outspoken conservationist, and a prolific broadcaster, columnist and photographer.

“In every remote corner of the world there are people like Carl Jones and Don Merton who have devoted their lives to saving threatened species. Very often, their determination is all that stands between an endangered species and extinction.
But why do they bother? Does it really matter if the Yangtze river dolphin, or the kakapo, or the northern white rhino, or any other species live on only in scientists' notebooks?
Well, yes, it does. Every animal and plant is an integral part of its environment: even Komodo dragons have a major role to play in maintaining the ecological stability of their delicate island homes. If they disappear, so could many other species. And conservation is very much in tune with our survival. Animals and plants provide us with life-saving drugs and food, they pollinate crops and provide important ingredients or many industrial processes. Ironically, it is often not the big and beautiful creatures, but the ugly and less dramatic ones, that we need most.
Even so, the loss of a few species may seem irrelevant compared to major environmental problems such as global warming or the destruction of the ozone layer. But while nature has considerable resilience, there is a limit to how far that resilience can be stretched. No one knows how close to the limit we are getting. The darker it gets, the faster we're driving.
There is one last reason for caring, and I believe that no other is necessary. It is certainly the reason why so many people have devoted their lives to protecting the likes of rhinos, parakeets, kakapos, and dolphins. And it is simply this: the world would be a poorer, darker, lonelier place without them.”
― Mark Carwardine, Last Chance to See
tags: animals, beauty, biology, conservation, earth, life, nature, wisdom, world
44 likes
Like

“There is something about dolphins.
It is difficult to put into words...”
― Mark Carwardine
2 likes
Like

“Wildlife conservation is always a race against time. As zoologists and botanists explore new areas, scrabbling to record the mere existence of species before they become extinct, it’s like someone hurrying through a burning library desperately trying to jot down some of the tittles of books that will now never be read.”
― Mark Carwardine
2 likes
Like

Is this you? Let us know. If not, help out and invite Mark to Goodreads.