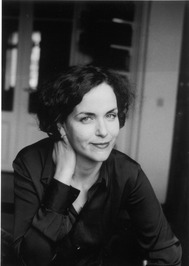 Agnès Desarthe is a French writer and translator. She writes both for adults and for children.

“I serve him a portion of chocolate, pear and pepper tart with a glass of chilled rosé. I watch him eat, and think that, in the end, he didn't lie: he is eating in my restaurant. Except it's not supper time, so he did lie. I look at him and think he's feeding off me because I put all of myself into that first tart, that inaugural dessert. I kneaded gently, melted patiently, saved the juice as I sliced, then incorporated it into the pastry, with the Masai-black chocolate, my brown pastry in my hands, rolling it out and shaping it, rolling it out and shaping it, the pepper over the pears because I believe- in the kitchen as in other areas- in the mysterious power of alliteration. The peppercorns are dark on the outside and pale yellow on the inside, not crushed or ground. Sliced. My pepper-mill is a grater, creating tiny slices of spice.”
― Agnès Desarthe, Chez Moi
tags: baking, chocolate, pastry, pear, pepper, tart
1 likes
Like

“My favorite chapter is about dogs. In it the author explains that dogs are not animals. According to him, or her (I don't know what sex authors are in the same way I don't know their names), dogs are a concept. A Doberman is not much like a Cocker Spaniel which shares few characteristics with a Chihuahua; a Saint-Bernard can meet a Pekingese and, theoretically, they can mate, but does that ever happen and would it be a good thing? Because, although zoologically they belong to the same species, in practical terms it's blindingly obvious they're not made for each other. The author went on to say how amazed he (or she) was that his three-year-old daughter (the tendency to mix personal life with reasoning makes me incline towards an Anglo-Saxon writer) could always recognize a dog when she saw one in the street, even though the animals she pointed at so enthusiastically- delighted by an opportunity to display her combined mastery of language and categorization- didn't look anything like each other. If a cat appeared, even a big beefy one, she would not be fooled. If a pony turned up, even the smallest of its lineage, smaller at the wither than a Great Dane, she would not cry 'Dog! Dog!' She knew. Even if they don't bark, have their ears trimmed so they prick up, or are bundled into miniature anoraks to protect them from inclement weather, dogs maintain their conceptual integrity.”
― Agnès Desarthe, Chez Moi
tags: breeds, concept, dogs, philosophy
0 likes
Like

Is this you? Let us know. If not, help out and invite Agnès to Goodreads.