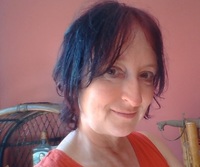 Born
in Chavey Down, The United Kingdom
May 23, 1964
Website
http://amgalant.com/
Twitter
Jakujin
Genre
Historical Fiction, Speculative Fiction
Influences
Beowulf, T.H. White, Dostoyevsky, James Tiptree Jr.
Member Since
December 2011
URL
https://www.goodreads.com/brynhammond
edit data
Writer, Australia, ex-UK.
I've been quietly at work on my historical fiction about 12th and 13th-century Mongols since 2003. It's my main occupation/obsession.
Before that, I spent years on a creative translation of Beowulf (unfinished) and wrote science fiction.
Keen on: walks by the sea, where I live. Baroque opera, Shostakovich, David Bowie. Books, old and a few new. Doctor Who and Star Trek: Discovery.

Curious about your twitter handle "Jakujin." Anything that you would care to share about that choice?
Bryn Hammond Chosen for its cuteness. No story attached I'm afraid. Except that I did want to tell the world, 'how cute is this Mongol name?'

I am a serious name f…moreChosen for its cuteness. No story attached I'm afraid. Except that I did want to tell the world, 'how cute is this Mongol name?'

I am a serious name fan. Names are such a thing with me I flick through novels to see whether the author & I have similar ideas on what's a great name, and if we don't... I figure I mightn't like the novel either.

Temujin, Jamuqa. Toqtoa, Tarqutai. Khabul, Daritai. Ambaghai, Bultachu. There was almost no name that turned up in his story, which I didn't have a strong urge to seize upon and use. Yes, this was a significant factor in my choice of story.

Other writers are entirely right to quote as one of their favourites a couple of their own. We write out our idea and our ideal of love, whatever that may be. Mine is extreme, and that’s because I grew up on medieval love, when they went at it with a religious intensity. As I wondered who on earth to answer with, I contemplated Gottfried von Strassburg’s Tristan and Isolde, as an exemplar of the medieval European state of love. Then there’s the medieval love traditions in Persian and Arabic of which you can say the same: religious intensity, extreme ethic. I don’t believe people invented romantic love in the 12th century, that’s a nonsense, but they made a cult of it. There’s a question as to how far this was an cultural cult, just fiction – how often practiced in real life and not by poets. But we live by fiction, and you can bet people took this artistic fashion seriously.

My favourite lover is Lancelot. As Malory gives his elegy:

My next favourite lover is Don Quixote, who dragged knightship into the early modern world at the cost of great ridicule. To be ridiculed for love was a martyrdom in love’s heyday from Aquitaine to Baghdad.(less)
flag
View 1 comment
See all 10 answers from Bryn Hammond…

I’m excited to see a project underway on a wall system that features in my novels:

perhaps the most enigmatic episode of ‘Great Wall’ construction in China and Mongolia: A wall system located in North China and Mongolia that covers a distance of over 3,500 km. The construction of this complex system, which includes long earthen walls and accompanying ditches, auxiliary structures and roads, is dat

Bryn Hammond is currently reading
Out of the Blue: Russia's Hidden Gay Literature; An Anthology
by Kevin Moss
bookshelves: currently-reading

Bryn Hammond is currently reading
Poems for the Millennium, Vol. 1: Modern and Postmodern Poetry from Fin-de-Siècle to Negritude
by Jerome Rothenberg
bookshelves: currently-reading

“Our children aren't here to fix our mistakes, but to have lives, lives we can't guess at.”
― Bryn Hammond, Against Walls
tags: parents-and-children
3 likes
Like

“If I laid a wager on which was to panic first, a block of granite or Jamuqa, I'd go the granite.”
― Bryn Hammond, Imaginary Kings
tags: sangfroid
2 likes
Like

“Temujin: "You are hard to get a plan past, my wife the queen."
Borte: "Indeed; that is what your wife the queen is for.”
― Bryn Hammond, Imaginary Kings
tags: husbands, khans, queens, wives
2 likes
Like

“Homo sum, humani nihil a me alienum puto.
I am human, and think nothing human alien to me.”
― Terence
62 likes
Like

“No, I am that I am, and they that level
At my abuses, reckon up their own;
I may be straight, though they themselves be bevel.

How dreary to be somebody!
How public, like a frog
To tell your name the livelong day
To an admiring bog!”
― Emily Dickinson, The Complete Poems of Emily Dickinson
tags: fame, poetry
886 likes
Like

“They accuse me--Me--the present writer of
The present poem--of--I know not what,--
A tendency to under-rate and scoff
At human power and virtue, and all that;
And this they say in language rather rough.
Good God! I wonder what they would be at!
I say no more than has been said in Dante's
Verse, and by Solomon and by Cervantes;

By Swift, by Machiavel, by Rochefoucault;
By Fenelon, by Luther and by Plato;
By Tillotson, and Wesley, and Rousseau,
Who knew this life was not worth a potato.
'Tis not their fault, nor mine, if this be so--
For my part, I pretend not to be Cato,
Nor even Diogenes.--We live and die,
But which is best, you know no more than I.”
― George Gordon Byron, Don Juan
5 likes
Like

“Write what you know. That should leave you with a lot of free time.”
― Howard Nemerov
tags: humor, knowledge, literature, writing
2131 likes
Like

Shakespeare Fans — 2223 members — last activity May 18, 2020 02:05PM
Anyone who likes Shakespeare and wants to discuss anything about his plays can join!

THE Group for Authors! — 11537 members — last activity 58 minutes ago
This is a group for authors to discuss their craft, as well as publishing and book marketing.

Fyodor Dostoyevsky
author of
Crime and...

Ivan Turgenev
author of
Fathers a...

Homer
author of
The Odyssey

Edmund Spenser
author of
The Faeri...

Steve wrote: "...have you ever heard of this?

No... not until your blog. I'll go read about it there.

Hey Bryn hope all is well in your world...have you ever heard of this? http://www.bbc.co.uk/news/science-env... aka the voynich document? What do you think?