Discover new books on Goodreads
See if your friends have read any of Karen A. Granovsky's books 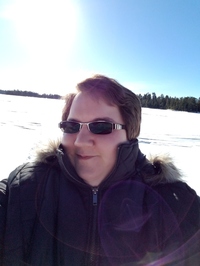 Born
in The United States
Website
http://www.karenagranovsky.com/
Twitter
KarenAGranovsky
Genre
Fantasy, Science Fiction
Member Since
February 2013
URL
https://www.goodreads.com/karenagranovsky
edit data
Karen A. Granovsky has always wanted to escape to other worlds. She now writes science fiction and fantasy novels professionally, and is the author of the Souls of the Stars saga and the Fantastical Creatures series. She lives in Illinois with her very impressive collection of nerd paraphernalia.

“If through no fault of his own the hero is crushed by a bulldozer in Act II, we are not impressed. Even though life is often like this—the absconding cashier on his way to Nicaragua is killed in a collision at the airport, the prominent statesman dies of a stroke in the midst of the negotiations he has spent years to bring about, the young lovers are drowned in a boating accident the day before their marriage—such events, the warp and woof of everyday life, seem irrelevant, meaningless. They are crude, undigested, unpurged bits of reality—to draw a metaphor from the late J. Edgar Hoover, they are “raw files.” But it is the function of great art to purge and give meaning to human suffering, and so we expect that if the hero is indeed crushed by a bulldozer in Act II there will be some reason for it, and not just some reason but a good one, one which makes sense in terms of the hero’s personality and action. In fact, we expect to be shown that he is in some way responsible for what happens to him.”
― Bernard Knox, The Oedipus Cycle: Oedipus Rex, Oedipus at Colonus, Antigone
tags: characterization, fate, meaning, plotting, purpose, writing
77 likes

Tad Williams
author of
The Drago...

Saladin Ahmed
author of
Throne of...

Jane Lindskold
author of
Through W...