,
Discover new books on Goodreads
See if your friends have read any of Heinrich von Kleist's books 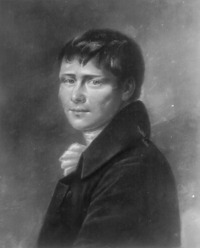 After several physical and nervous breakdowns, in which he even burned the manuscript of one of his dramas, Heinrich von Kleist reentered the Prussian army in 1804, working in Berlin and Königsberg. There he wrote "Amphitryon" and "Penthesilea."

After being discharged in 1807, Kleist was apprehended on suspicion of being a spy. After this he went to Dresden, where he edited the art journal "Phoebus" with Adam Müller and completed the comedy "The Broken Pitcher" ("Der zerbrochene Krug") and the folk play "Katchen von Heilbronn" ("Das Käthchen von Heilbronn").

Back in Berlin, the one time Rousseau devotee had become a bitter opponent of Napoleon. In 1811, he finished "Prinz Friedrich von Homburg." Finding himself again in financial and personal difficulties, Heinrich von Kleist, together with his lover, the terminally ill Henriette Vogel, committed suicide near the Wannsee in Berlin in 1811.

· 20,877 ratings · 1,245 reviews · 348 distinct works • Similar authors
More books by Heinrich von Kleist…
Quotes by Heinrich von Kleist  (?)
Quotes are added by the Goodreads community and are not verified by Goodreads. (Learn more)
“But paradise is locked and bolted....
We must make a journey around the world to see if a back door has perhaps been left open.”
― Heinrich von Kleist, On a Theatre of Marionettes
tags: inspirational, tenacity
85 likes
Like

“the kiss and the bite are such close cousins that in the heat of love they are too readily confounded”
― Kleist Heinrich Von
tags: hatred, love
28 likes
Like

“We see that in the organic world, to the same degree that reflection gets darker and weaker, grace grows ever more radiant and dominant. But just as two lines intersect on one side of a point, and after passing through infinity, suddenly come together again on the other side; or the image in a concave mirror suddenly reappears before us after drawing away into the infinite distance, so too, does grace return once perception, as it were, has traversed the infinite--such that it simultaneously appears the purest in human bodily structures that are either devoid of consciousness or which possess an infinite consciousness, such as in the jointed manikin or the god.”
― Heinrich von Kleist, Selected Prose
tags: consciousness, god, grace, innocence, self-knowledge, self-reflection
17 likes
Like