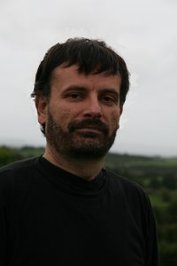 Born
in The United Kingdom
July 12
Website
http://www.henryhallan.me
Twitter
henryhallan
Genre
Fantasy, Historical Fantasy, Science Fiction
Member Since
December 2011
URL
https://www.goodreads.com/henry_hallan
edit data
I'm a writer and a smallholder living in rural Connaught. I have been writing for many years, and started to publish my work in 2012.
My five-volume fantasy, "The Fall of the Sea People" will be complete on 19th November 2015. All five volumes will be available on Amazon as a single work, while other stores will carry the five volumes separately.
It's been a busy year: I already published my historical fantasy "To Sail Atlantis" in September, the fourth volume of my fantasy this Spring and my science fiction book, "Europa's Crossing," in the summer.
Plans for next year are still being finalised but will certainly include another two historical fantasies: another one filled with our 16th Century pirates and one set in 19th Century London.

For those of us who saw the original Star Wars in the cinema, way before it was ever called "A New Hope", there has been a certain trepidation on hearing the announcement of a new Star Wars film. You all know what I am talking about and, tonight, I went to see for myself. And do not be afraid. This isn't another "Phantom Menace!"

Lucy's Omniscope: or Real Observers in Fictional Worlds (Science Fiction & Fantasy)
1 chapters   —   updated Aug 13, 2013 12:50PM
Description: This is a 100-word drabble I wrote a while ago. I'll not write too much or the description will out-weigh the story. But it's not meant to be entirely serious.
The Day That (Literature & Fiction)
1 chapters   —   updated Aug 13, 2013 12:40PM
Description: This won the 2012 short story competition ran by Berkshire Woman and Family Magazine. It's a bit outside my normal genre but it includes the things I tend to write about: relationships between fallible people.

“By such reflections and by the continuance in them of a divine nature, th qualities which we have described grew and increased among them; but when the divine portion began to fade away, and became diluted too often and too much with the mortal admixture, and the human nature got the upper hand, they then, being unable to bear their fortune, behaved unseemly, and to him who had an eye to see grew visibly debased, for they were losing the fairest of their precious gifts; but to those who had no eye to see the true happiness, they appeared glorious and blessed at the very time when they were full of avarice and unrighteous power.

Zeus, the god of gods, who rules according to law, and is able to see into such things, perceiving that an honourable race was in a woeful plight, and wanting to inflict punishment on them, that they might be chastened and improve, collected all the gods into their most holy habitation, whch being placed in the centre of the world, beholds all created things. And when he had called them together, he spake as follows --”
― Plato, Timaeus/Critias
tags: atlantis, fall-of-atlantis
10 likes

“So, then, the best of the historian is subject to the poet; for whatsoever action or faction, whatsoever counsel, policy, or war-stratagem the historian is bound to recite, that may the poet, if he list, with his imitation make his own, beautifying it both for further teaching and more delighting, as it pleaseth him; having all, from Dante’s Heaven to his Hell, under the authority of his pen.”
― Philip Sidney, A Defence of Poetry
5 likes

“Be kind, for everyone you meet is fighting a battle you know nothing about.”
― Wendy Mass, The Candymakers
tags: kindness
398 likes

GOOD REVIEWS — 7491 members — last activity 3 hours, 58 min ago
This Group is only for authors who are looking for reviews and Reviewers who love to read books and share their reviews.