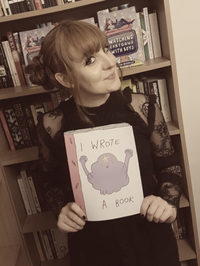 Born
in Australia
Website
http://www.emmamichelle.com.au
Genre
Contemporary, Humor and Comedy, Young Adult
Member Since
September 2011
URL
https://www.goodreads.com/emmamichelle
edit data
Emma Michelle is a Canberra-born Melbourne writer. Her work has been published in places like Going Down Swinging, Kill Your Darlings, and Lonely Planet.

She won the inaugural Freedom to Write Freefall Scholarship in 2018, and her story “Like Siamese” was longlisted for the 2016 Birdcatcher Books Short Story Award. In 2017 Emma self-published a collection of short stories and personal essays titled Watching Cartoons with Boys. It received glowing reviews from Ramona Magazine and Underground Writers.

Outside writing fiction, Emma is interested in academic research that examines the writer J. D. Salinger (especially his depictions of trauma). Her undergraduate thesis examined Salinger’s The Catcher in the Rye and “Seymour: An Introduction” as n Emma Michelle is a Canberra-born Melbourne writer. Her work has been published in places like Going Down Swinging, Kill Your Darlings, and Lonely Planet.

She won the inaugural Freedom to Write Freefall Scholarship in 2018, and her story “Like Siamese” was longlisted for the 2016 Birdcatcher Books Short Story Award. In 2017 Emma self-published a collection of short stories and personal essays titled Watching Cartoons with Boys. It received glowing reviews from Ramona Magazine and Underground Writers.

Outside writing fiction, Emma is interested in academic research that examines the writer J. D. Salinger (especially his depictions of trauma). Her undergraduate thesis examined Salinger’s The Catcher in the Rye and “Seymour: An Introduction” as narratives of unresolved grief, and she has since been published in this field. ...more

My short story “Metronomy” is shortlisted for an award

Last month I had some very welcome news in what has been a weird and unsettled time: a short story I wrote was shortlisted for an award!

I started writing my short story “Metronomy” during the 2018 Daylesford Freefall Writing Workshop, and last month I found out it had been shortlisted for the 2020 Apollo Bay WordFest Short Story Award. This is a real honour and represents the first time that my wo

Emma Michelle is currently reading
Release the Bats: Writing Your Way Out Of It
by D.B.C. Pierre
bookshelves: currently-reading

“I ask myself if there is an irresponsible aspect in relaying thoughts of pain as inspiration, and I wonder whether Housman actually infected the sensitives further, and pulled them back into additional darkness. Surely it is true that everything in the imagination seems worse than it actually is - especially when one is alone and horizontal (in bed, as in the coffin.) Housman was always alone - thinking himself to death, with no matronly wife to signal to the watching world that Alfred Edward was now quite alright - for isn’t this at least partly the aim of scoring a partner: to trumpet the mental all-clear to a world where how things seem is far more important than how things are? Now snugly in eternity, Housman still occupies my mind. His best moments were in Art, and not in the cut and thrust of human relationships. Yet he said more about human relationships than those who managed to feast on them. You see, you can’t have it both ways.”
― Morrissey
2 likes

“No, on the outside view there was nothing for anyone to notice about me. I remained one pillar of a trinity, another pillar was lying only temporarily (temporarily! temporarily! temporarily!) in the hospital, I was the pilot of a three-engine aircraft, one of whose engines had stalled: there is no reason to panic, this is not a crash landing, the pilot has thousands of flight hours behind him, he will land the plane safely on the ground.”
― Herman Koch, The Dinner
tags: oh-the-tension, parenting, tension, unreliable-narrator
2 likes

“I amazed myself, above all, with how well I was able to manage. Michel got to school on time, his teeth brushed and his clothes clean. More or less clean: I was less critical of a few spots on his trousers than Claire would have been, but then I was his father. I’ve never tried to be ‘both father and mother’ to him, the way some half-assed, home-made-sweater-wearing head of a single-parent household put it once in some bullshit programme I saw on afternoon TV.”
― Herman Koch, The Dinner
tags: parenting
1 likes

“… when Michel came home from school, for example, and everything was as it should be. My own voice, above all, asking him what he wanted in his sandwich, also sounded as it should have. The larder was full, I had done all of the shopping that morning. I took care of myself as well, I looked in the mirror before leaving the house: I made sure my clothes were clean, that I had shaved, that my hair didn’t look like the hair of someone who never looks in a mirror - the people in the supermarket would have noticed nothing unusual, I was no divorced father reeking of alcohol, no father who couldn’t handle things. I clearly remembered the goal I had set for myself: I wanted to keep up the appearance of normality. As far as possible, everything had to remain the same for Michel as long as his mother wasn’t around. A hot meal every day, for a start. But also in other aspects of our temporary single-parent family, there shouldn’t be too many visible changes. Normally, it wasn’t my habit to shave every day; I didn’t mind walking around with stubble. Claire had never made a big deal out of that either, but during those weeks I shaved every morning. I felt that my son had a right to sit at the table with a clean-smelling, freshly shaven father. A freshly shaven and clean-smelling father would not prompt him to think the wrong things, would in any case not cause him to doubt the temporary character of our single-parent family.”
― Herman Koch, The Dinner
tags: parenting
1 likes

J.D. Salinger
author of
The Catch...