,
Discover new books on Goodreads
See if your friends have read any of Hans Jonas's books 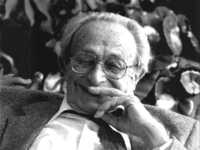 · 1,150 ratings · 103 reviews · 73 distinct works • Similar authors
More books by Hans Jonas…
Quotes by Hans Jonas  (?)
Quotes are added by the Goodreads community and are not verified by Goodreads. (Learn more)
“Blind nature will nearly always select the most probable, but man can let the most improbable become actual.”
― Hans Jonas
tags: miracles, nature, probability
13 likes
Like

“Whatever variety evolution brings forth... Every new dimension of world-response...means another modality for God's trying out his hidden essence and discovering himself through the surprises of world-adventure...the heightening pitch and passion of life that go with the twin rise of perception and motility in animals. The ever more sharpened keenness of appetite and fear, pleasure and pain, triumph and anguish, love and even cruelty - their very edge is the deity's gain. Their countless, yet never blunted incidence - hence the necessity of death and new birth - supplies the tempered essence from which the Godhead reconstitutes itself. All this, evolution provides in the mere lavishness of its play and sternness of its spur. Its creatures, by merely fulfilling themselves in pursuit of their lives, vindicate the divine venture. Even their suffering deepens the fullness of the symphony. Thus, this side of good and evil, God cannot lose in the great evolutionary game. ”
― Hans Jonas
7 likes
Like

“In living things, nature springs an ontological surprise in which the world-accident of terrestrial conditions brings to light an entirely new possibility of being: systems of matter that are unities of a manifold, not in virtue of a synthesizing perception whose object they happen to be, nor by the mere concurrence of the forces that bind their parts together, but in virtue of themselves, for the sake of themselves, and continually sustained by themselves. Here wholeness is self-integrating in active performance, and form for once is the cause rather than the result of the material collections in which it successively subsists. Unity here is self-unifying, by means of changing multiplicity. Sameness, while it last, (and it does not last inertially, in the manner of static identity or of on-moving continuity), is perpetual self-renewal through process, borne on the shift of otherness. This active self-integration of life alone gives substance to the term “individual”: it alone yields the ontological concept of an individual as against a merely phenomenological one. The ontological individual, its very existence at any moment, its duration and its identity in duration is, then, essentially its own function, its own concern, its own continuous achievement. In this process of self-sustained being, the relation of the organism to its own concern, its own continuous achievement.
In this process of self-sustained being, the relation of the organism to its material substance is of a double nature: the materials are essential to its specifically, accidental individually; it coincides with their actual collection at the instant, but is not bound to any one collection in the succession of instants, “riding” their change like the crest of a wave and bound only to their form of collection which endures as its own feat. Dependent on their availability as materials, its is independent of their sameness as these; its own, functional identity, passingly incorporating theirs, is of a different order. In a word, the organic form stands in a dialectical relation of needful freedom to matter.”
― Hans Jonas, The Phenomenon of Life: Toward a Philosophical Biology
tags: life, ontology, organism
2 likes
Like