Discover new books on Goodreads
See if your friends have read any of R.E. Butler's books

Born
in The United States
August 24, 1976
Website
http://www.rebutlerauthor.com
Twitter
rebutlerauthor
Genre
Romance, Science Fiction & Fantasy
edit data
A midwesterner by birth, R.E. lives on the East Coast now, enjoying the seagulls and the ocean. When she's not writing, you'll find her curled up with her Kindle, playing with her kids, or jonesing for chocolate.

Author of five series, R.E. loves to explore the supernatural and dream about what might be if people really did get furry once a month.

R.E. Butler isn't a Goodreads Author (yet), but she does have a blog, so here are some recent posts imported from her feed. 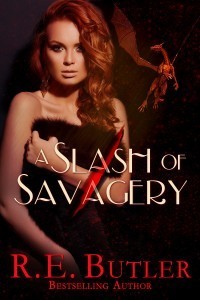 I’m thrilled to share the cover of my upcoming book, #8 in the Wiccan-Were-Bear series, A Slash of Savagery!  This book is going to be an Amazon exclusive, which means it won’t be available anywhere but Amazon.  Isn’t the cover fantastic?!  The always amazing Valerie Tibbs of Tibbs Design worked her magic on another amazing cover.

As many of you know, when I first wrote A Curve of Claw,

“She gave his fake boob a poke. "What the hell is in here?"
He laughed and pulled the top down part of the way to reveal a grapefruit. She groaned onto her hands.
"Hey, I know it's been a while since I've seen a real tit up close, but I think I remember the basic shape. What would you have used?"
"Oh, hell, Michael,I have no idea what a man uses to stuff a maid's uniform. Where did you get it anyways?"
Another of his shit-eating grins lit his face. "From the plus sized section of the lingerie store in Sweedesboro. I'm a woman's extra large." He was so proud of the fact that she laughed until her side ached.”
― R.E. Butler, Jason & Cadence
tags: cadence, maid-uniform, michael
22 likes
Like

“He smirked. "It's my wolf.He's trying to claw through my skin to get to you."

She shook her head and narrowed her eyes. "I don't believe that for a second. Your wolf is a sweetheart."

He could picture his wolf preening and grinning like an idiot at her compliment.”
― R.E. Butler, Logan & Jenna
tags: jenna, logan
13 likes
Like

“I'd come to see that home wasn't just about the place where you lived or the memories within the walls. It was the love you saw reflected in the eyes of the people around you, and the strength of your own feelings that made a place home.”
― R.E. Butler, A Flash of Fang
tags: home, love
13 likes
Like

Is this you? Let us know. If not, help out and invite R.E. to Goodreads.