,
Discover new books on Goodreads
See if your friends have read any of Alicia L. Wright's books 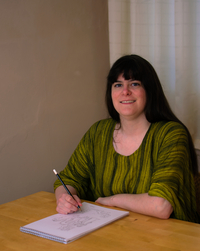 Hi Alicia, I'm getting close to finishing Miss Prince and am enjoying it. How much of Cinders is based on you and are you working on anything right now?
Alicia L. Wright Glad you're enjoying it!

A lot of my characters have a little bit of me about them and I could make you a list. A hobby, a fear, a life goal, a skill.…moreGlad you're enjoying it!

She's not really based on me, so much as she has some of the same hobbies as I did when I was teenager (and some I still have now) because they fit with the story. And because if I can relate to her goals and hobbies, other people can to! And I think that Sera and Lucy both caught my mood at the time I started writing their books. with Sera, she doesn't really know where she is going in life, and Lucinda is feeling very isolated, a feeling of my own at the time.

I do think Ruby and Sapphire from Steven Universe are a really cute couple, I love how they interact.

For a book couple, I'd choose Sam Vimes and Sybil Ramkin from the Discworld series. They work really well together. (less)
flag
See all 5 answers from Alicia L. Wright…

You wait two years for a sequel...

...And then two come along at once!

Miss Prince now has two sequels, The Map is the Treasure and Vampires Don't Belong in Fairyland.

It would have helped if I'd written them in the right order, I suppose. Now I know why writers of series take so long between books sometimes.

I have a second draft of a fourth book done, but I am exhausted and will be taking a nice, long break before I tackle it again Read more of this blog post »
1 like · Like  •  0 comments  •  flag

Alicia Wright is currently reading
The Lore of the Land: A Guide to England's Legends, from Spring-Heeled Jack to the Witches of Warboys
by Jennifer Westwood
bookshelves: currently-reading

“I'm selfish, impatient and a little insecure. I make mistakes, I am out of control and at times hard to handle. But if you can't handle me at my worst, then you sure as hell don't deserve me at my best.”
― Marilyn Monroe
tags: attributed-no-source, best, life, love, misattributed-marilyn-monroe, mistakes, out-of-control, truth, worst
160286 likes

“The fool doth think he is wise, but the wise man knows himself to be a fool.”
― William Shakespeare, As You Like It
tags: wisdom
44340 likes

“Marrying Therandil? I don’t know. I’ve tried talking to my parents, but they won’t listen, and neither will Therandil.”

“I didn’t ask what you’d said about it,” the frog snapped. “I asked what you’re going to do. Nine times out of ten, talking is a way of avoiding doing things.”
― Patricia C. Wrede, Dealing with Dragons
tags: actions-over-words, frog, funny
212 likes

Folklore & Fairytales — 375 members — last activity Jan 17, 2022 01:17PM
For everyone who is interested in folklore and fairytales, either as a reader/hearer, writer/storyteller, or researcher.